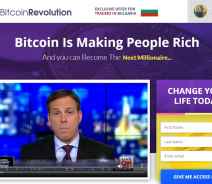 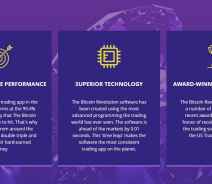 We’re gonna start a revolution today guys! A revolution against jobs and work in general because from now on we won’t have to listen to our bosses and we won’t have to wake up early in the morning to go to the office. No more! With the help of the latest Bitcoin Revolution robot, we can make up to $1,300 per day, every day and of course, we don’t need any financial or trading knowledge. Don’t let my “enthusiasm” fool you: we are dealing with yet another scam, in fact, a copy of an older scam and this review is meant to show why you should stay away. 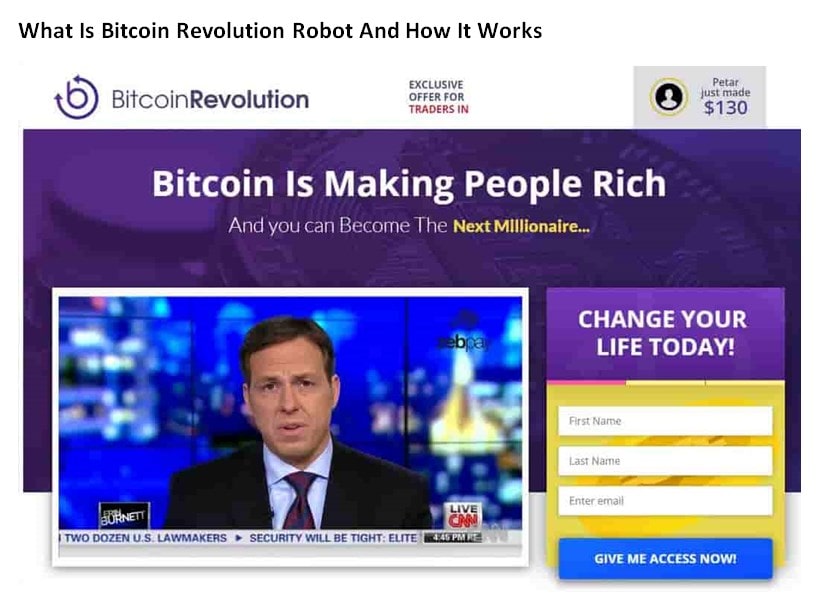 What Is Bitcoin Revolution Robot And How It Works

Bitcoin Revolution is a trading robot built on “award-winning” software, that is 0.01 seconds ahead of the market and can make its users $1,300 per day, achieving 99.4% accuracy. Now that’s wrong on so many levels that I don’t even know where to start but I’ll try.

And the last claim: up to $1,300 per day, with an accuracy of 99.4%. For years now, these robot/software sellers have claimed 99% to 100% accuracy. And how many times was that true? ZERO! Not once a trading robot even came close to such numbers.

Then we have some testimonials (hey, at least they are putting in some work) but as always, these are as fake as a 99 dollar bill.

If you notice, all four people in the pic above are from the United States (the currency is Romanian Leu because I was using a VPN, but that’s not very important). Now with the use of my trusty VPN, I switched to The Netherlands and… surprise, surprise: the same people have instantly relocated to live in The Netherlands. Obviously fake testimonials, meant to increase your trust in the software and to make you believe that people near you are actually making this much money.

If you are not yet “convinced” about the legitimacy of this Bitcoin Revolution auto trading robot, maybe you need extra incentives and the scammers are willing to give them to you: enter Bill Gates and Richard Branson talking about how impressive Bitcoin is:

Of course, the simple fact that Branson and Gates talk about Bitcoin has nothing to do with the performance of the Bitcoin Revolution software. They didn’t take part in its creation and they are not backing it in any way shape or form. The crooks just thought it would be good for business to have the faces of two major personalities on their website. Just grab some footage of Branson and Gates talking about Bitcoin in some random interviews, do a bit of video editing and Presto! to the casual eye it looks like the guys are involved with Bitcoin Revolution App.

And since we are on the Branson/Gates topic, we must warn you that Bitcoin Revolution is a cheap copy of another cheap copy of another cheap scam software. Yea, that’s a mouthful but it’s true: Bitcoin Revolution, Bitcoin Trader, Bitcoin Formula and Bitcoin Secret are all the same scam, with the same video talking about how Bitcoin is this and that, how it will make you a millionaire in no time and all that jazz.

What Real Users Have To Say About Bitcoin Revolution

With ads for Bitcoin Revolution/Formula/Secret popping up everywhere these days, some people are wondering why they are still allowed to advertise:

The fact is they are not allowed to advertise but they do everything in their power to bypass filters and keep spreading their BS. As Ryan puts it:

And yes, indeed, the fact that we keep seeing marketing material from these scammers goes to show that people are still buying into the hype and still getting taken for a ride. But you know better – Stay Away!

Lately, I see more and more comments like John’s above and that’s actually a good thing because people are waking up… hopefully. And about deserving to lose it – now I’m not so sure about that, because everyone can make a mistake. What’s important is to get something in return… at least a lesson in how not to get scammed.

Ahmed has the same idea as John above but he’s a bit more heated about the whole thing. He is right though: there’s tons of info online about these scams and all you have to do is Google it. You can do that or come directly to ThatSucks.com because we are doing our best to always stay on top of these scams and expose them as soon as they hit the fan.

Warning! Your Money Is In Danger!

I don’t think I need to say it again but I will: Bitcoin Revolution is a SCAM! It works like just about all robot scams that we’ve seen so far. Once you’re hooked and open an account you will be asked to deposit about $250, which you will be told it’s still your money but it’s needed for trading. The software has a 99.4% accuracy but not for trading as they advertise, rather for wiping out accounts so all your initial deposit will be lost, then you will be asked by an account manager to deposit more money, which will be lost again.

All parties involved get a piece of the pie – your pie! Bitcoin Revolution guys get an affiliate commission from the broker you sign up with, the brokerage gets your deposit, which goes into their pockets. Don’t be their metaphoric punching bag and don’t believe for a second that such an auto trading robot will make you a millionaire. Please!