Full Review of the TMA Indicator for Binary Options Trading

I always say that I don’t care about indicators or strategies and that trading should be treated cold and impersonal. I still stand by that statement but there is one indicator I’ve been using so long that I can almost see it even if it’s not on a chart… and yea, maybe I consider it a long time friend. Well, I don’t talk to it and we don’t drink beer together, but it bought me more than one beer by helping me make some bucks. As you probably guessed already, it is called TMA which stands for Triangular Moving Average and it’s… not a trend indicator.

How I use the TMA?

I’m not really a math guy and I don’t like having opinions on things I’m not good at so I will not go into the calculations used for this indicator. Anyway, probably you are more interested in knowing how to use it and make some money so let’s do that but remember that throughout this article I will explain how I use the TMA. There are other uses for it (maybe as a trend indicator) so feel free to experiment.

The indicator will appear similar to the Bollinger Bands on your chart but smoother; it has a middle line and two outer bands that adjust constantly in an attempt to contain price. Hmm, some indicator tries to contain price… haha, what a joke. No indicator can contain price! But wait, that’s exactly what I’m looking for: I want price to escape the bands of the TMA, either the upper or the lower, I don’t really care because this is not a trend indicator. Once price moves outside the TMA, it is starting to become overextended and to show signs of exhaustion. Take a look at the picture below and notice what happens when price touches the TMA bands or even goes outside them. 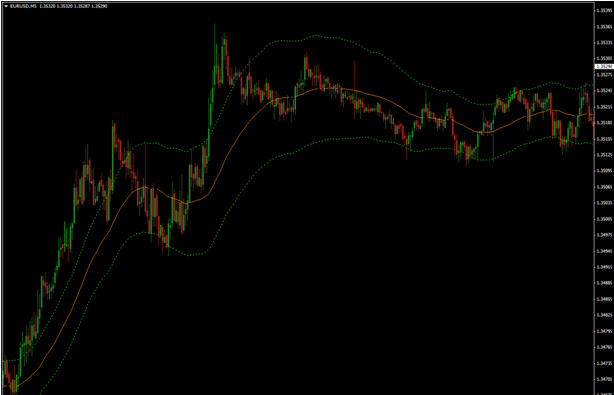 As you can see, more often than not, after going outside the bands, price gets “tired” and retraces back inside. I chose this picture on purpose to make you understand that TMA is not some magic indicator and should NEVER be used alone: look to the left of the picture. You see how price exits the bands and just keeps going? If you were to trade solely based on the signals provided by the TMA, you will hate this indicator. It is not meant to be used as a trade trigger. Instead, it will give you a heads-up about a possible change of direction and it almost acts as an overbought/oversold indicator: when price is above the upper band, it means it’s overbought and when it is below the lower band… you get it, right?

The middle line changes colors form blue to red and vice versa, giving you an indication of trend and you will also notice some numbers in the lower right corner: TMA Range – shows you the distance in pips between the bands. This number will fluctuate according to current volatility and also, the bands will come closer together in times of slow movement. TMA trend – shows you how strong the current trend is; a higher value means the trend is strong and a lower one indicates a ranging market. The numbers on the TMA itself show you the distance in pips between current price, TMA bands and TMA middle line. These are the basic uses of the indicator but keep in mind it is not meant to be used as a standalone indicator. Don’t worry, I know I might sound like a broken record, but I’m willing to take that risk.

Why does the TMA Suck?

The indicator will only suck if you don’t use it as it’s meant to. For me it doesn’t suck and it’s been that way for several years so I really can’t give you reasons why it sucks.

Why the TMA doesn’t Suck?

Well, if you read the article this far, you should have an idea about the reasons why the TMA doesn’t suck… in my opinion. Always remember this is just my opinion and maybe some of you will take it off your charts immediately. I don’t want to convince anyone to use it and just how I always say “Use whatever works for you”, I must tell you the TMA works for me so I will keep using it.

Although I have been using the TMA for several years now and I am comfortable with it, I still get sucked into bad trades sometimes. Probably this will happen more often to a first-time user of the indicator and good results won’t come right away. However, my opinion on this tool is clear: I never trade without it and I think that says a lot. Of course, I must say “Thank you” to the guy who initially coded it and especially to the guy who re-coded it to make it non-repainting. Good luck if you need it.