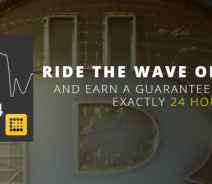 The Bitcoin Loophole is a free trading software and investment group totally focused on the ever-expanding Bitcoin market. It takes advantage of market anomalies that only occur in the fast-paced cryptocurrency world and utilizes minimal Bitcoin investment to make wild returns. The system is so good in fact that they, not sure exactly who “they” are, say you will earn a minimum of $13,000 in the first 24 hours alone! Guaranteed to produce positive results 99% of the time. The system is owned and operated by the Bitcoin Loophole LTD, a company that is not registered, regulated or recognized by any jurisdiction I could find.

How Much Can You Earn with the Bitcoin Loophole?

The Bitcoin Loophole is a trading software but also a group of traders using the software. Because it is still in beta testing it is free but will require an initial investment on your part. The initial investment is only $250 dollar, surprisingly similar to minimum deposits from most binary options brokers. With this money, you can expect to earn $500 an hour, $13,000 in 24 hours or up to $74,000 in 3 months (I hope it doesn’t slip by you that if you are earning $500 per hour you should make way more than $74,000 in 3 months, just saying).

The video is narrated by a man who calls himself Steve Mckay, a trading a software specialist who has been featured in Forbes and Money Magazine. The problem is that if you go looking for the issues that feature him you won’t find them, they aren’t real. The “loophole” is never fully explained in the video or supporting materials but rest assured its good. What is also never explained fully is who these people are, where they are located or the business backing the website.

Another thing I don’t fully understand is if this is an algorithm for taking advantage of the cryptocurrency market why you have to sign up with a binary options broker to use it. Oh yeah, because the “loophole” is a way to make profits on something without actually buying it. The story, as Mr. Mckay tells it, is that while working as a software developer on Wall Street he was tasked with creating this fantastic algorithm, after a year of hard work it finally went live but was pulled after only 2 days. That was when he got an anonymous call that turned out to be his former boss. His boss told him he had already made enough to money to quit his job and to never ever share the secret with anyone else.

Signing Up to the Bitcoin Loophole is Free!

Like all binary options scams signing up is free, and the first step in your journey to financial freedom. Once you sign up you will be asked to fill out a short questionnaire so they can match you with the best broker from their list of recommended brokers. What you will find is that many, if not all, of the names on this list, are known frauds, many of which are already on our list of not approved brokers. Names like Greenfields Capital, Prestige Options, and Stoxxmarket are only a few that I know for sure are not to be trusted. Once you sign up you will gain access to the same old piece of crap autotrader you can find on most of the scams we review. For the most part they are SpotOption white labels who at least offer cryptopairs on the website… some of the brokers don’t.

All clues point towards a blatant scam, which is obvious right from the start. Yet some people still fall for it and this is partly because they are so eager to make easy money that they disregard any common sense and partly because of the fake reviews posted by “honest review websites”. Just take a look below:

The website that published the “review” above, rates Bitcoin Loophole 9.3 out of 10 and praises the software throughout the entire piece. It doesn’t even feel like a review, more like a marketing article meant to confirm that Bitcoin Loophole is legit and will actually make you $13K per day or whatever they are claiming. An ad that poses as a review, that’s all. “No user complaints […] expedited withdrawal procedures…” sure guy, whatever you say.

Another way to catch some fish is through ads on Facebook. Yes, I know FB banned that type of ads, but some are still going through their filters and have to be manually taken down, which takes time. Here’s what one user had to say:

Probably by the time you read this, the ad has been taken down, but it’s clear that advertising on Facebook is still a thing for these scammers.

According to some online sources, this Bitcoin Loophole is a recycled version of Bitcoin Trader, which blatantly (and illegally) used the names of Dragon’s Den TV stars to make it look like they are affiliated with the scam, thus making it appear legit. Here’s what Peter Jones, one of the Dragon’s Den investors had to say about Bitcoin Trader:

As you can see, the user who replies confirms that Bitcoin Code/Trader/Loophole all use the same ruse to make it look they are backed by Dragon’s Den stars. Most of the related ads on relevant websites were quickly taken down so by the time you read this, you won’t find them online or at least I haven’t.

We have never been afraid to call a scam for what it is and the same is true for our readers, who have been always vocal and trying to keep others from getting scammed.

“The writing is on the wall, the loophole will suck you!!!” Listen to this guy, listen to what we and other legit review sites have been saying all along. This is a scam, just like 99% of Bitcoin robots out there. And always remember: if it sounds too good to be true, it probably is… and $13K per day certainly sounds too good.

How To Invest in (Real) Bitcoin

I’ll be honest, Bitcoin is badass. I love it and trade it and own it. I also would recommend for those interested to get involved with it but this is not the way. This site is just another scam and one that, quite frankly, was pretty easy to spot. The first warning is the wild claims of riches, nothing works that well and if it did, it would probably be a scam, just like this one. The second warning flag is the “limited space available” BS. They show a counter with only 5 spots left when you first go to the site, while you are watching the video it ticks down to 2 (where it stays) but each time you go back it will reset to 5 (imagine that). So, if you want to chase phantom riches and end up losing your ass, go ahead and get this software. If you want to really trade BTC go somewhere else.

5 Responses to “Bitcoin Loophole”
Sort By:
Click here to cancel reply.
Thanks for Submitting!