If by some unexplainable means you could go back and change one thing related to your trading, what would that be? Wait, let’s make it even better: if you could undo three mistakes, which ones will you choose? Come on, don’t be shy, we all go wrong sometimes. Of course, that unexplainable way of traveling through time is not available to us so we cannot fix our mistakes but maybe this article will help the newbies avoid making the same ones all over again. Well, I made so many that it’s pretty hard to choose the biggest three, but here goes:

I’m actually writing this during night time… I couldn’t sleep so I figured it’s better to get up and do something useful than just lie in bed thinking about trading (yea, that’s what I do when I can’t sleep). A cup of coffee to my right, ashtray to my left (smoking is bad, I know, but I’m wearing a nicotine patch trying to kick that habit) and my cat eating my house plants (I wish there were a patch for that…) so everything is within normal parameters except the lack of sleep. But even without enough rest, it’s easy to see what a big mistake I made jumping into 60 second trading. It’s true that I don’t trade that way anymore but I must admit I was tempted at first by the opportunity of such quick profits and I tried it. I even had some success… of course it wasn’t because of my “analytical skills”, but rather due to a combination of luck and some strong movement of the market. The moment I realized I cannot consistently predict the outcome of the next one minute candle was also the last time I placed a 60 seconds binary option trade. The thing is that making money with this type of trading is perfectly viable and achievable (that’s what attracts us), but the main problem is consistency. Making some money today doesn’t help me if I’m gonna give it all back tomorrow. Everything that lacks consistency in trading is bound to fail sooner or later so yea, it’s possible to make money with 60 seconds… keeping them is the challenge.

Metaphorically speaking, the spreadsheet is the thing that makes us push on and keeps the dream alive. On a more down-to-Earth note, it’s just… an Excel spreadsheet containing a calculation of how our account will look if we keep making a certain percentage every week, month or year and compounding our winnings. With “just” 15% added to your account every month you will make a million bucks in a few years and the Excel spreadsheet makes it look easy, but it doesn’t consider any other factors such as the psychological aspect. Fear, greed, doubt, losing streaks, broker interference, none of these are accounted for in the sheet so the goal of achieving your dream becomes somewhat closer but do not fall for it as I did. Trading and all aspects involved is so much different than an Excel worksheet makes you believe and I learned that the hard and disappointing way. Years passed and my account wasn’t where my spreadsheet said it would be. The thing is that you have to treat each trade as if your entire account depends on it and not think about how much money an Excel spreadsheet says you’re gonna have in a year or 5. 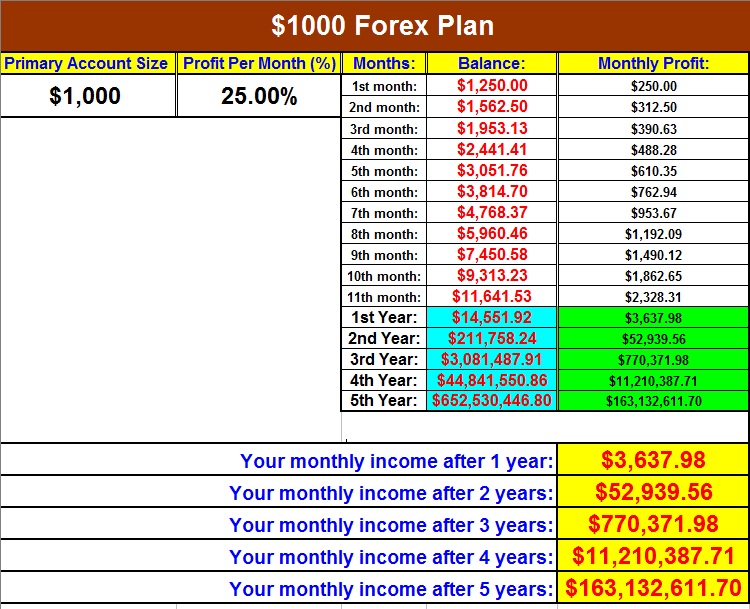 We all know that scammers plague the online trading industry and give it a bad name. Well, I didn’t know it when I started trading and I deposited with the first broker I came in contact with. Sites like thatsucks.com were almost non-existent back then and I didn’t bother to read the Terms and Conditions of the broker… it was too much work and I was too busy getting rich to pay attention to signs of a potential scam or bad broker. I thought the Bonus is a welcome gift, not that it will tie my money to their platform; I thought the account manager is actually a good trader who wants me to get rich. Big mistake, but one I never made again.

Mistake Made, Lesson Learned… Or Not? Avoid Repeating Mistakes!

Hopefully all you’ll pay is just attention to my mistakes and you will avoid them in the future. Whether you are a new trader or a more advanced one, don’t make any of my mistakes and remember the words of Otto von Bismarck: “Only a fool learns from his own mistakes. The wise man learns from the mistakes of others”

I am sure you heard the quote above many times and that you understand its meaning, but I want to focus a bit on the first part “…a fool learns from his mistakes…” Well, what does that make me if even a fool learns from his mistakes, but I don’t? Unfortunately, when it comes to trading, I made the same mistakes over and over again… and I bet I’m not the only one. Sometimes our inner self is our worst enemy… heck, sometimes I think my inner self is paid by my broker to make me trade like an idiot, but assuming that’s not the case, let’s take a look at the reasons why traders repeat their mistakes.

If you don’t know you are doing something wrong, you are probably going to keep doing it. Let’s take an example: if you didn’t learn that a Stop Loss should be variable, you might end up doing the same mistake over and over again. Some traders use the same Stop Loss when they trade the four-hour chart and when they trade the 15-minute chart. If a 30 pip Stop Loss could be okay for a smaller time frame, it won’t do you any good on a four-hour chart. Also, your Stop Loss order should be placed at a strategic point, not a fixed amount of pips away. You cannot just decide “I’m gonna use a 20, 30 or 50 pips Stop Loss every time” because the market might not agree with your predetermined number. This mistake falls into the category of mistakes that are generated by the lack of knowledge and of course, the topic is so broad that I could probably fill more pages that you could read. Then again, this statement might be wrong because I don’t know how much you can read… see, lack of knowledge.

Failing To Draw A Conclusion

Think about this: if you hit your head on a wall, it will hurt, maybe even bleed if you give it all you’ve got. Inevitably, you will draw a conclusion: Hey, this wall is harder than my head and I’m gonna stop “punishing” it if I don’t wanna pass out. That’s an easy conclusion. But sometimes in trading things are not so black and white: say you are an intraday trader and you take about 10 trades a day, finishing the day in profit. If one, two or three were taken out of impulse, those can easily go unnoticed because at the end of the day you are giving yourself a nice pat on the back and think about what a great trader you are, not about the mistakes you did. In other words, those monkey-trades how I like to call them fly under the radar and no conclusion is drawn i.e. “I took some trades out of impulse, frustration or greed. I must stop that if I don’t want to blow the rent money”. Bottom line: after each trade, stop and analyze what you did. Learn from your mistakes and draw a conclusion.

Let’s face it: some people are just not cut out to be traders…because they’re stupid. And I’m not talking about “stupid” as in low IQ or low grades in school. No, no, a “stupid” trader can be a very intelligent person, but when it comes to buying, selling and following the rules of a system, they fail miserably… mostly because they cannot learn from their mistakes. The stupid trader will make the same mistakes over and over again because of his stubbornness and his need to prove he is always right. If today he sells while the market is rallying big time and he gets stopped out, tomorrow he will sell again and again, until he runs out of money or until the market finally reverses. If the latter is true, he will declare his victory over the market, starting with a deep and important voice: “I knew it was coming down.” Yea, stupid, of course, it’s gonna come down eventually, but that doesn’t make you right.

Cockiness, Insanity And A Touch Of Love

The most important – and probably single – reason why I love my mistakes is that they help me improve. You cannot become a better trader without being wrong a few times. I admit, I probably made all the mistakes in the book and yes, I also repeated them but eventually I managed to overcome the stupid urge of being self-destructive and most of all, cocky. Yes, cocky because that’s what you are when you don’t admit you are wrong and keep doing the same thing over and over again. I say “cocky” but a famous quote which is often attributed to Albert Einstein says: “insanity is doing the same thing over and over and expecting a different result”… So what are you? Insane or Cocky?

posted in Binary Options Articles • 2 Comments
2 Responses to “My Biggest Trading Mistakes – Read and Avoid”
Sort By:
Click here to cancel reply.
Thanks for Submitting!