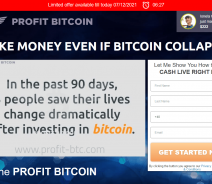 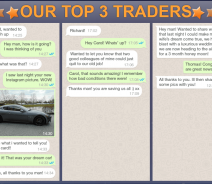 Profit Bitcoin is a free trading robot that can make you a millionaire in no-time… In a way, I’ve missed seeing these robots, with their incredible, heart-warming and 100% true stories, but to my joy, it seems like it’s open season once again. And Profit Bitcoin has it all: an intriguing, spy-style, totally true-story video, a millionaire who wants to help us all because… reasons, and the testimonials of successful people who are using his software. Isn’t this wonderful?

The Story Of the Software That Saved the World

Ok so when you first land on the page, you will notice that it’s a limited offer and that you will only be able to get the software free of charge if you act FAST. Don’t worry, it will be there tomorrow and the day after. Then we get to the meat of it all: the sales video.

After yapping about how rich you will be, the narrator tells the incredible story of his robot. I’m gonna sum it up to save you the time needed to watch the whole video. This is the Bond-style part: he was “just another mid-level software developer” and his boss asked him to build a robot that invests in Bitcoin on auto pilot, so he can share it with his wealthiest clients. This was allegedly a “private request from the big guys up top”. 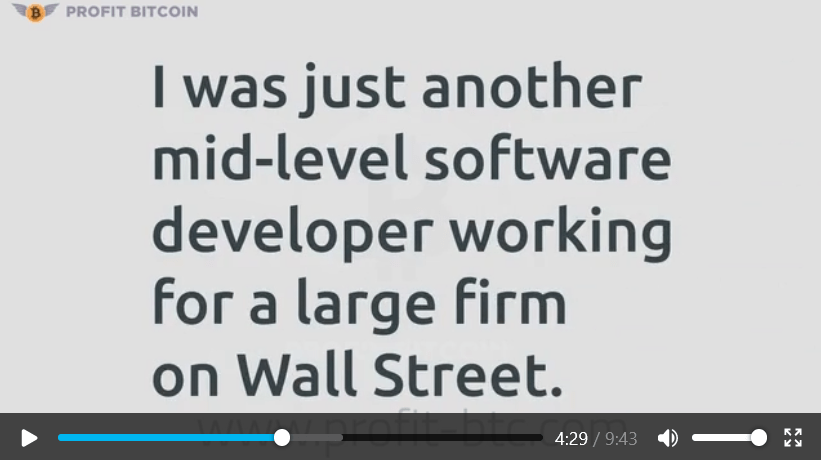 So let’s just pause for a moment: why is a private request from the “big guys”, a project which will be shared with only the wealthiest clients assigned to a mid-level dev? Shouldn’t you trust your best guy with something like that? Anyway, let’s go on.

For a full year he worked on the top-secret project day and night. I’m sorry but I can’t help myself: so nobody in that firm noticed what he was doing? Didn’t anyone see his monitor during that time, or did he work in a separate, secluded room? And if that was the case, why didn’t his colleagues become suspicious?

Whatever… two days after the software was finally finished, the boss called him from a blocked number saying he left town and instructing our mid-level dev to not speak about the software with anybody. Guess the guy is not too good at keeping secrets or following instructions since you’re reading this. Also, what’s the purpose of the call, anyway?

Long story short, he tried the software himself, became a millionaire and now he is sharing it with all of us, just how Musk and Bezos are doing. Oh, wait, they aren’t? I thought that’s how it works: once you become a millionaire, you have to share your secret with unknown people on the internet. I will be waiting for Tesla’s manufacturing secrets, battery patents and everything else. Also, Amazon, I need all your databases.

Of course, no scam is complete without telling you how much you can make. Profit Bitcoin is no different, so its “performance” is displayed throughout the website: north of $13,000 a day! That’s impressive, right?

One would think that to make that amount of money, you will have to work you’re a$$ off, but one would be wrong because according to the website “Our members work an average of 20 minutes a day or less. Because the software handles the trading, the amount of “work” required is minimal.” Wow, nice. So you get it for free and you don’t have to work because the robot places trades automatically. Sounds legit. Real talk: you will not make any money with this. Projected profits: $13K/day. Real profits: zero or loss.

The Profit Bitcoin website goes overboard with testimonials and pictures of happy people:

Look, a woman with a watermelon. Oh yeah, this simply shows that the software works, but there is more proof: 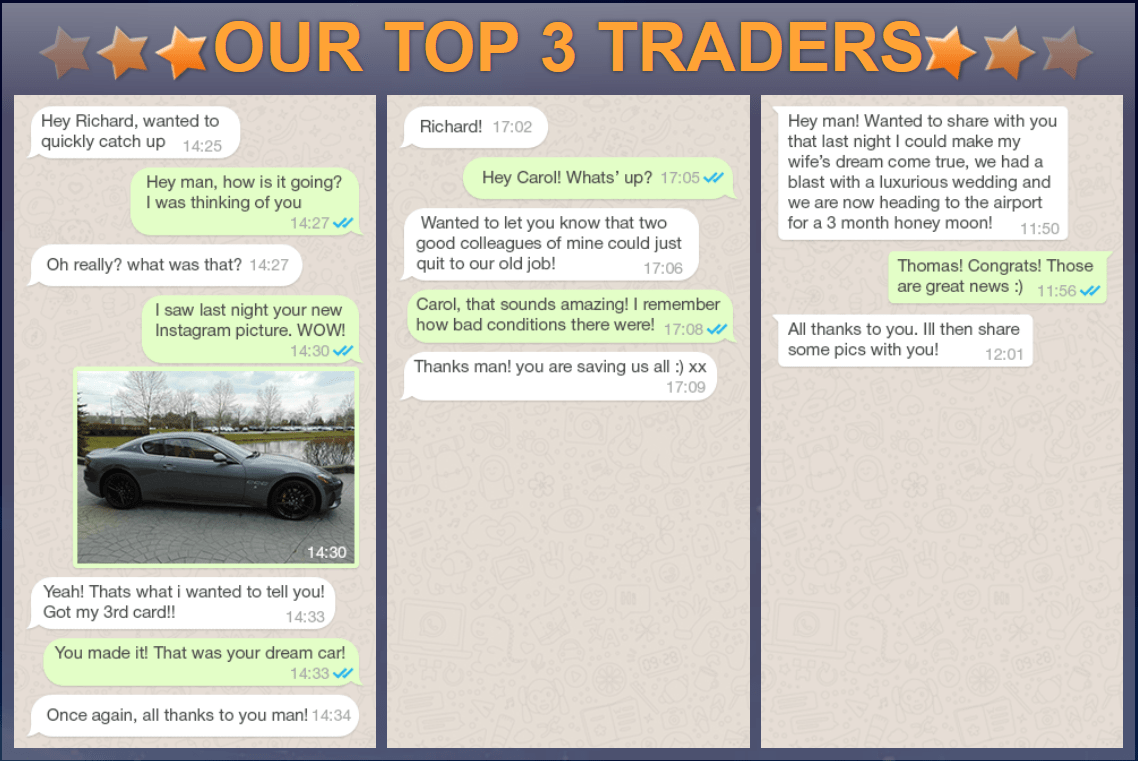 Look at these “true” chats between the creator of Profit Bitcoin and successful traders. One of them just bought his third car, Carol’s doing great and even her colleagues quit their job, while Thomas is going on a 3 months honeymoon. All thanks to this robot. Isn’t it amazing? 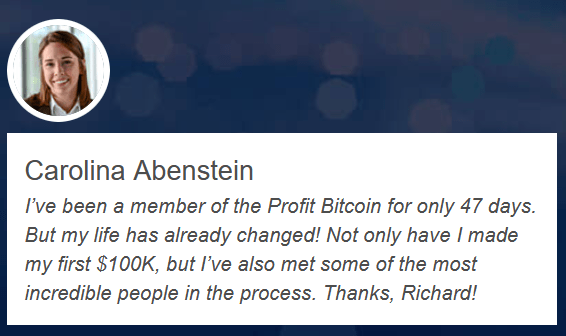 Carolina doesn’t seem to be doing so great because in 47 days she only made $100K. What happened there? You were supposed to make more than $600K over that period. Better ask for your money back… oh wait, it’s free. 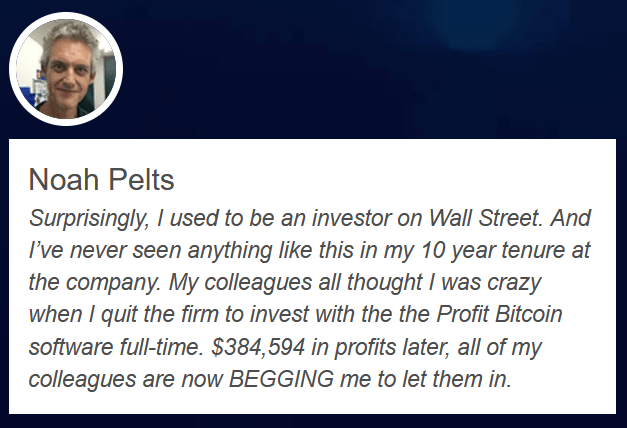 Noah was an investor on Wall Street but what’s more interesting is that now his colleagues are “BEGGING” him to let them in. Why, guys? It’s totally free and publicly available. Just visit the site and sign up. Anyway, Noah, you should follow the example of your Profit Bitcoin mentor and be more compassionate. After all, he is sharing his Golden Goose with the world and you can’t even let your colleagues in?

Do I need to say it? Yes I guess I do: this is a scam designed to make you deposit with a broker. Said broker will then give a commission to Profit Bitcoin, depending on how much you deposit. The testimonials are ALL fake, the pics are stock photos, and Profit Bitcoin is a reiteration of another “famous” robot called the Bitcoin Code.

During the sales/story video, they didn’t even bother to change the name from Bitcoin Code to Profit Bitcoin and the narrator introduces himself as Steve. Who is Steve? Keep reading.

Now, let’s take a look at our Bitcoin Code Review to get more familiar with its “creator”, Steve McKay who welcomes us to his robot and thousands of dollars daily:

And now the creator of Profit Bitcoin:

Wow, wow, these guys think so much alike. They are literally using the SAME words and their “totally different” robots make the SAME amount of money within the SAME period. What a bunch of crazy coincidences!

Wrapping It Up: Keep It or Skip It?

Skip it, guys! It looks like these days, the robot creators are not even bothering to come up with new stuff. They simply take an old scam, rename it, use literally the same content and present it as a new robot. I guess there are still people who fall for this shite, just like there are people who believe that some Namibian prince died without any relatives and they will now inherit everything if they send $100 to pay some legal fee.

It doesn’t get any easier than this: it’s a scam! And if you want to argue that it’s free so it cannot be a scam, get back to me on that after a few weeks of trading with their “recommended broker”, using this software exclusively. But then again, maybe you strike gold and I will look like a fool, in which case I will reconsider my position regarding Profit Bitcoin. Either way, take care of your money and always make your own, informed decisions!