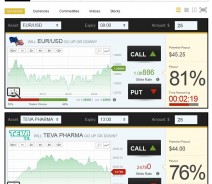 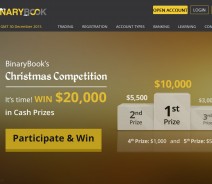 BinaryBook was founded in 2015 and under new management by Dastos KGH Ltd and clearing services are managed by Hermes Solution D.O.O., Golubovci B.B. 81000 Podgorica, Montenegro. BinaryBook is unregulated and there is not much information on who they are except for the virtual offshore offices. Be advised, BinaryBook may be shutting down and does not accept new clients.

Is BinaryBook a Scam?

First of all you should know that BinaryBook is not a regulated brokerage. This is a warning sign (I would never put my money into an unregulated broker) but it doesn’t mean necessarily they are a scam. Several online sources (unconfirmed) list BinaryBook as a recommended broker for trading robots such as Free Money System or Quick Cash System and this is another red flag. If you want to deposit with a broker you should do so because you’ve done your research and consider them reliable enough, not because some million-making system recommends that broker.

Several people have complained online about BinaryBook’s representatives asking them to deposit more and more money, but as we know, this is a wide spread tactic. However, just because it’s wide spread doesn’t make it OK. After all, if some guy bumped into your car, I don’t think you would be cool with him saying “Dude, it’s OK! Everybody is doing it.”. Now returning to the original question: Is BinaryBook a Scam? Let’s just say that a raised level of caution is recommended. I would not open an account with binarybook.

Update October 2016: BinaryBook is a recommended broker by NEO2. In other words, if you sign up for NEO2, you will be asked to open an account with BinaryBook. We consider NEO2 a cheap scam and that says a lot about the brokers they associate with. Read our full NEO2 review here.

According to their Homepage, BinaryBook doesn’t accept new clients anymore. However, according to their Live Chat, they do, but only from certain regions. I have to point out that their representative closed the chat session as soon as I started to ask uncomfortable questions. And by “uncomfortable” I actually mean “normal” questions (for you and me) like ”Why are you telling me a different thing than your homepage does?”.

Update March 2017: BinaryBook is no longer accepting new clients after a massive amount of complaints and legal action taken in the UK. However, the customer support did not admit they were shutting down. We also noticed that their traffic has dropped as of lately which is not strange since they are not accepting new clients. Overall, we still recommend you do not trade with BinaryBook but they don’t accept new clients anyway so the choice is easy, pick a reputable and regulated broker instead!

Notice!: This broker is not recommended due to a large number of complaints. Find users complaints below, continue reading this review or get started with a trusted broker now.

Their website and platform are slow and clunky. My computing power is well above what’s needed for a binary options platform to operate and my internet connection gives me 47.27 Mbps download and 58.45 Mbps upload (just tested it before writing this) so I guess someone needs to improve their website. Update 2017: they don’t accept new clients which I should probably have mentioned as a plus since they have been acting as a scam and are warned by many authorities but, yeah, you get the point.

Why BinaryBook Doesn’t Suck in 50 Words

They make a fair attempt to keep their website up to date, including Daily Market Analysis. We often see Daily analysis that is outdated for months so it has zero importance for traders but BinaryBook tries (and so far succeeds) to bring fresh content every day, helping their clients. It’s not something amazing but considering that others don’t do it – kudos to BinaryBook. Update 2017: Their market analysis seem to be up to date indeed but they are simply based on an indicator being oversold or overbought and half the predictions were wrong so I wouldn’t put too much hope into that.

At first glance, BinaryBook is not much different than other SpotOption brokers. Unfortunately for them, at second and third glance, they are still not much different. The educational material (videos and e-book) is almost identical to the one seen on the websites of other brokers that use SpotOption and most of it is locked until you register. Just because it’s similar to others, it doesn’t mean it’s bad; if you see it for the first time and you don’t know anything about binary options, it will help you get started. However, you need to be aware that it has a marketing feel to it more than educational but maybe that’s just me.

Earlier I’ve told you they have added new features, so let’s talk a bit about them but keep in mind these are built by SpotOption and it’s their merit; BinaryBook simply makes them available to traders. Apart from the normal options contracts (Call/Put, Pairs, Long Term, Turbo, One Touch and Ladder), BinaryBook offers FX/CFD options and Spot Follow. The FX/CFD style is similar to forex trading, where clients can choose their Stop Loss and Take Profit, with the possibility of profiting up to 500%. Personally I believe this style is too complicated and it took me longer than expected to understand how it works (and keep in mind I am a forex trader) so I am not sure how appealing it will be to newbie binary options traders. The 500% might be great but I guess you can imagine it’s hard to get. The Spot Follow feature is actually copy trading. You can chose which trader to follow and you can set limits to the amount used to copy his/her trades. There is some information about the traders you can follow, but in my opinion that information is very thin and not enough for me to put money on the line. If I am going to follow someone, I need to know more about them and their trading/money management style.

From afar BinaryBook might seem as an innovative brokerage but when you dig deeper, you realize that most of the extra/new features come with the SpotOption platform. Brokers nowadays don’t seem to shake the copy-paste style and what’s even worse, they don’t seem to want to. All brokers are “number one” and BinaryBook goes as far as saying they focus on “[…] uniqueness”. How can you be unique when you and 70% of all brokers in the binary options industry are using the same platform?

Many clients are sucked into dealing with BinaryBook by following get rich quick scams and others have issues withdrawing. Their bonus terms are on the negative side, if you thought 20-40 times the bonus was high, try 60 times!! Therefore, it is needless to say there are many angry complaints screaming scam. Complaints are varying, some are talking about how they got suckered by scams to deposit with this unregulated broker, others talk about bonus terms being so high they will never be able to withdraw. I even saw someone being pissed off about how his personal information was sold to others. You can find the complaints on Forexpeacearmy, binaryoptions.net, ripoffreport.com and other trusted forums. But it doesn’t end there, apparently, many scammed clients of BinaryBook from the UK have been taking action against the firm – source: thisismoney.co.uk.

Clients from the United States are accepted but the website is available in only two languages (English & Turkish) and it takes a long time to load. The overall experience is slow but the SpotOption platform is easy to use and nicely structured. Update March2017: They don’t accept new clients as mentioned above.

Number of assets and expiry times 14/20

Trading opportunities can be found of 31 currency pairs, 3 commodities, 12 indices, 22 stocks and 2 pairs. This is a medium sized asset basket but it’s reasonable. The expiry times are characteristic to SpotOption platforms, ranging from 60 seconds to 15 minutes, hourly, end of day and long term. One Touch options (with predetermined expiry time) are also available.

Update October 2016: The asset index now lists 16 currency pairs, 38 indices, 7 commodities and 41 stocks but we don’t know how many are actually available for trading.

To open an account you don’t have to pay anything but when you want to withdraw money, things change: you will have to pay a charge of 50 USD/EUR/GBP for wire transfers and 25 USD/EUR/GBP for credit/debit card withdrawals. For card withdrawal you will also have to pay a Processing Fee (a fee to a fee???) of 10 USD or 7 EUR or 5 GBP. These fees and charges are way too high for the industry (we recommend reading the Terms and Conditions if you want to open an account). Live Support was reasonable enough, although not the best I’ve seen. The effective return ranges around 80% (medium for the industry), depending on the asset but options styles such as One Touch, Ladder or FX/CFD can bring substantially higher payouts.

Update October 2016: Their support representative wasn’t helpful at all, answering a question with a question. The support seemed a bit confused as she did not even recognize their own company owners when I asked about “Dastos KGH Ltd” – she replied that’s not the owner even though the terms and conditions clearly state they are the owners. She then copy pasted the little info there was, the virtual office and the same name I already mentioned to her. There was nothing more about the company she could give me. Be advised, new clients are not accepted.

Deposits and withdrawals can be made through wire transfer and credit/debit cards such as Visa, Delta, MasterCard, Diners, Visa Electron, Maestro, Maestro UK (Switch) and Solo. The time it takes for a withdrawal is not specified by BinaryBook so we recommend you ask for written information. Minimum deposit depends on the account type you choose, starting at 1000 USD for a Micro Account and going as high as 50,000 USD for a VIP account. The Bonus is correlated with your account type, starting at 20% (Micro Account) and going as high as 100% for the Platinum Account. The bonus for the VIP account is not specified on the website. The required turnover is extremely high at 60 times the bonus received but in this volume FX/CFD trades are not included. Beware, accepting a bonus means you cannot withdraw any funds at all!

FX/CFD and Spot Follow are interesting additions but nothing impressive. On top of that, these features are the merit of SpotOption, but I guess BinaryBook could have opted out of such features thus some credit goes to them as well. Thumbs up for an up to date Daily Market Analysis even if this shouldn’t be considered and extra feature.

17 Responses to “BinaryBook”
Sort By:
Click here to cancel reply.
Thanks for Submitting!