There are two somewhat contradictory schools of thought when it comes to trading price action. The first says “buy low and sell high” and the second says “buy high and sell higher” (in an uptrend) and “sell low, buy back lower” (in a downtrend). Today’s strategy focuses on this second way of doing things and although I found it on forexstrategiesresources.com, it is not anything new; in fact, this way of trading is based on the classic breakout pattern.

What is Breakout Trading?

Jack-in-the-Box… that’s what breakout trading is. Remember that little toy some of us had when we were kids? When you would close the lid of the box you would apply tension to the spring which once released would push that creepy Jack doll out. Come to think of it, it’s a pretty scary toy. Not fun at all. But anyway, it’s a good way of understanding price breakouts. First we need to build the Box and to do that, we will look for an area where price is bouncing up and down, accumulating enough tension to break out… just as if it were trapped in a box. Picture coming up: 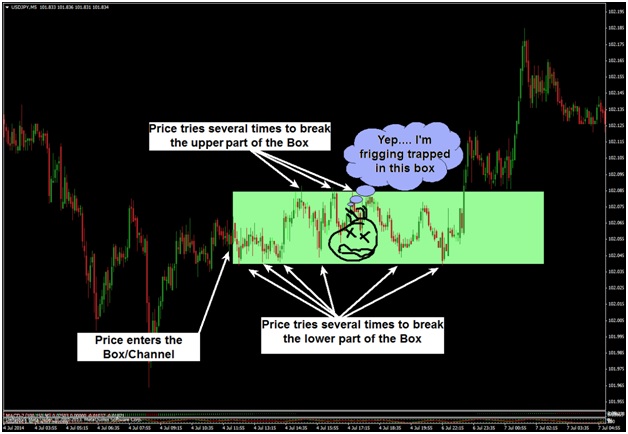 Just in case you are wondering, that greenish box is drawn by hand, not by any sort of indicator. To identify and draw it, you will have to look for areas where price touched at least two times each part of the box (upper and lower). Here’s another example: 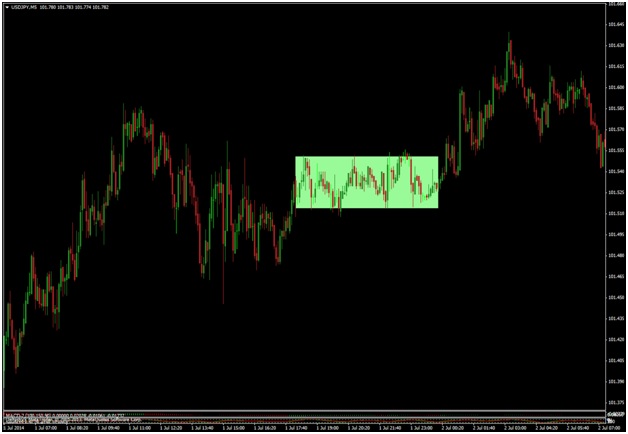 Notice both parts of the box are touched more than twice and price bounces off of them. In both my examples, you can see that once price entered the box, it had trouble getting out but once it did, it continued strongly in the direction of the breakout. This is what we will be looking for and this is the setup for our trade. Next we will wait patiently until price will get out of the box in either direction. We don’t really care about the main trend direction, but if our trade agrees with the prevailing trend, that’s extra confirmation and it is considered a higher probability setup.

Ok, now that we’ve identified the box and we waited patiently for price to breakout in either direction, what should we do? Should we enter the trade in the direction of the breakout? Nope! We have to wait some more.  And the thing we are waiting for is a pullback that will re-test the recently broken box. Assuming price breaks the upper side of the box, we must wait for it to come back down to touch (or come very close) the recently broken level and then to bounce higher. Once this happens, we will join the fun and open our trade. Here’s a good trade according to this breakout system: 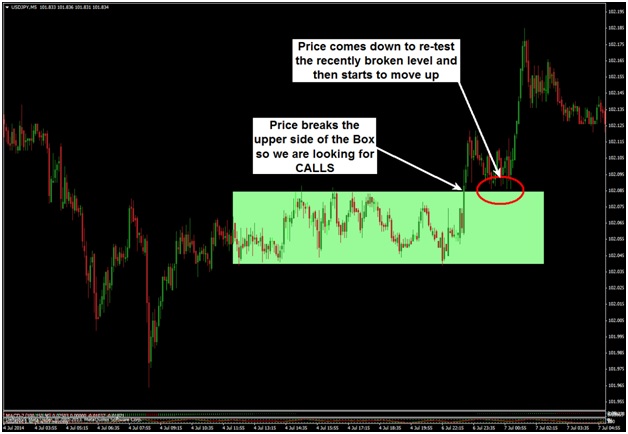 Why does the Box Breakout strategy Suck?

On all my pictures above, I have a big advantage: I can see how price moved. But in live trading, you will not see the entire box because it is not completely formed yet. That’s why we consider a valid box is formed only after price touched both the upper and lower parts twice and we will only draw it when that happens. Another issue might be finding the exact entry because that is not very well defined. We wait for the breakout, then pullback to re-test the recently broken level but how do we know when that pullback is complete and price will start to go in the direction of the break? One way of doing it is with the use of an oscillator like Stochastic or maybe even MACD; the other way is to just confirm visually that price started to move and join it.

This is a classic pattern and to become “a classic” a good reason is needed. Its high accuracy is the reason for that and also why it has been used for a very long time in stock, forex trading and probably on all assets that can be charted. Keep in mind that the pullback I talked about earlier is very important because it is meant to protect us from false breakouts (a false breakout is a move outside the Box followed almost immediately by a return inside it).

Bottom line: Should I use the Box Breakout Strategy?

The strategy takes a little while to get used to but for all you price action traders, this is a must-know strategy. Even if you won’t use it as your main strategy, it is something you should be aware of because after all, price behavior is more important than any other indicator, considering the fact that indicators are derived from the movement of price. That being said, I believe the profitability of this strategy is highly correlated with the trader’s skill so you should use it with a lot of caution at first.