Stocks traded sideways for the most part this week, with the S&P 500 showing signs of stalling after a 6-week rally, and the Euro Stoxx 600 closing unchanged after two weeks of losses.  In Europe, positive earnings from PSA Peugeot Citroen, Barclays, Heineken and ABB Limited were offset by weaker economic data, and the Euro Stoxx 600 managed to stabilize after falling nearly 1% in the previous two weeks.  Most of the previously negative movements were triggered by political uncertainties in Spain and Italy and this was bringing volatility to bond yields in both of those countries.  Nonetheless, the longer term trend has been bullish, with the Stoxx 600 still showing gains of 2.7% year-to-date.

Arguments for this year’s run higher are resting on the improved growth outlook for the region, sufficient liquidity in the financial markets, continued earnings strength, and relatively low stock valuations when we look at some indices from a multi-decade perspective.  But this week, some investors took the opportunity to exit the market and take profits at elevated levels, given the proximity to the holiday-shortened trading week next week.  From an earnings perspective, the Euro Stoxx 600 is now trading at 12.3 times earnings, which is roughly in line with its 5-year average.

This week, Eurozone GDP figures showed a larger than expected drop of -0.6% for the fourth quarter (market expectations called for a drop of -0.4%), and the region’s finance ministers met to discuss additional aid for Greece and Cyprus.  This is coming as elections in Italy and political obstacles in Spain could cause markets to re-focus attention back onto Europe’s debt crisis, so this week’s tepid moves in stock markets are not completely surprising.  Encouraging factors, however can be seen in corporate earnings, with more than 55% of the companies in the Stoxx 600 beating profit estimates this week, and this helps support the longer term growth outlook for 2013.

Next week is data-heavy for Germany, with the ZEW survey, CPI/PPI Inflation numbers, Purchasing Managers’ Index, and GDP all scheduled for release.  We will also have Eurozone PMI, and all of these numbers are expected to show improvements from what was seen the previous month.  On the earnings calendar, be sure to watch for Dell, HP, and Wal-Mart on the US side of things.  On Tuesday, currency traders should watch for the RBA meeting minutes release, from last month’s central bank meeting, as this will give key indicators for when we might see another interest rate change.

My Trading Recommendations in 50 Words

1. With the German releases next week, we should see some volatility in the Euro and anything above 1.3420 is a weekly sell.  If we see the EUR/USD reach 1.3420 I will enter into weekly PUT options as the near term picture looks weak on both a technical and fundamental basis, and a test of the 61.8% Fib looks imminent. 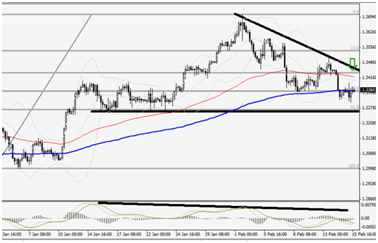 2. For stocks, I will be looking for a one month CALL option Starbucks (SBUX) at 56.  The company’s recent sales and earnings per share releases were strong and the consumer discretionary stocks could outperform other sectors if we start to see some continued stalling in the S&P as a whole.