Lately my head is spinning from all the tools I try out, attempting to find that perfectly accurate indicator also known as the Crystal Ball. In case you’re wondering if I found it… nope, I didn’t. And more than that, I strongly believe it doesn’t exist. Um, did I just destroy your dreams? Don’t worry, the perfect combination of indicators exists out there; I’m just saying that a single indicator cannot give you outstanding results. So, since we are looking for the perfect combination of tools/indicators, here’s one that might qualify as an important part of the puzzle: the Double Smoothed Stochastic developed by Mr. Bressert.

How to Use the DSS Bressert?

The calculation used for the DSS Bressert is similar to the one used for the normal Stochastic but since Math is not my strong point, I am not gonna go into much detail about it. In fact, I believe most of you are interested to know how good the indicator is, not the exact math behind it. So, just to keep you interested, here’s a picture of the indicator in action (Blue lines are winners and Red lines are losers): 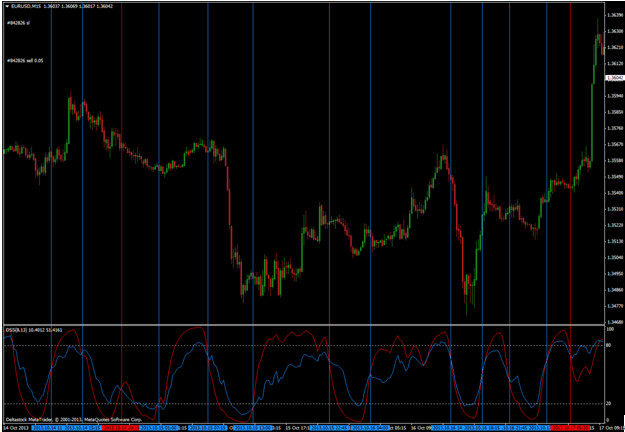 Eleven winning trades and two losing trades… that’s how far my Math goes, but in my book, that means outstanding, especially because only one indicator is used, not a combination of 5 or 10 or 100. Ok, now that you are probably interested, let’s see what the actual signal to enter a trade is. I am going to keep it as simple as possible: when the red line of the indicator crosses the blue line downwards, that’s a signal to open a bearish trade. When the red line crosses the blue upwards, open a bullish trade. Maybe I don’t need to mention this… but I am talking about the lines of the indicator, not the vertical lines which I placed on the chart to show you the entries.

Just as the normal Stochastic, the Double Smoothed Stochastic shows us the overbought and oversold condition of a specific asset. You may have noticed the indicator has two levels set at 80 and 20; a reading above 80 suggests the asset is overbought (price is considered too high) and it may come down. Following the same logic, a reading below 20 indicates an oversold condition (price is too low) and a potential move up. The default settings of the indicator are EMA-period 8 and Stochastic-period 13 but you can adjust those to make it even smoother than it already is or faster and more responsive if you need more signals. Keep in mind the fact that making it faster will also make it less accurate.

Installing the DSS Bressert on the Meta Trader 4 Platform

The indicator itself is available for download for free at the bottom of this article and on several other places around the internet. Extract the content of the archive in your “indicators” folder. Once you’ve done that, restart your Meta Trader 4 platform and attach the indicator to a desired chart.

Why does the DSS Bressert Suck?

The indicator has a major weakness: a strong trending market. In this type of market, any signal against the trend should NOT be followed. In other words, if in a strong uptrend the DSS crosses downwards, indicating a bearish trade, disregard it and wait for a signal in the direction of the trend (Buy or Call). If you take a look at my picture, you will notice that a clear trend is not present and the indicator performs very well. Now take a look at any chart with a strong trend and you will see that counter-trend trades rarely yield a profit.

Why the DSS Bressert doesn’t Suck?

Just as any tool, it must be used with caution and in conjunction with other confirming factors. If you manage to do that, this indicator will become one of your favorites. Just as the name suggests, the DSS is smoother than the normal Stochastic (which remains a very good indicator) and this makes it more accurate, showing a closer-to-reality overbought/oversold condition of the asset.

Wrapping it up – Smooth as Silk

To successfully use Bressert’s Double Smoothed Stochastic you have to know a thing or two about trends and ranging markets. If you will just pick it up and trade each cross of the 2 lines, the winning percentage will drop substantially, but if you incorporate some sort of trend recognition indicator (there are plenty), you’ll be sleeping on silk sheets… well, maybe you already do, but I think you get the picture ;)