Oh, I kinda missed these super bots, these money-making engines. Not because there’s a shortage of such “miracles” (we know there’s plenty of them out there), but because it’s been a long time since I’ve come across a truly interesting one like the 100ProfitBot… heck, they even say that if I am not mesmerized and stunned, I can drop them an email and they’ll send me 100 bucks. Haha, something tells me that I won’t be impressed but also that I will not get any money from them. Bring it! 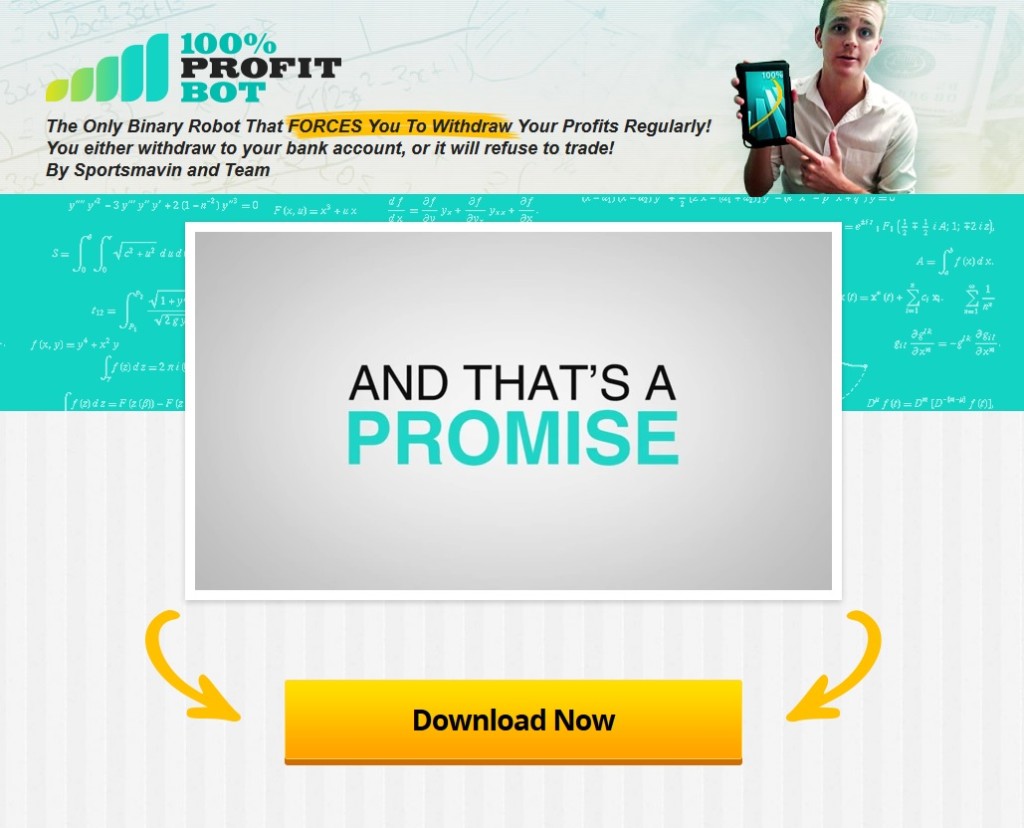 The Force of BS Strong in this One it is!

The presentation video starts in the “classic way”: They tell me that every money making binary options robot they’ve come across has been a scam … and they have built their company to prove that good profit can be made. They bash other software providers… wow, what a surprise. But guess what, they don’t settle for a quick dirt-throwing. Nooope, they go all out and start describing in detail how others have a long one page website (hmm, they do too), with a video in the middle (hmm, they do too) and offer the software free of charge (hmmmmm, they do too). The power of coincidence I guess… Also, they assure me I won’t get any screenshots of fat accounts (more about this later) and that I am in a “B.S.-free zone”. Oh, great!

After what seemed to be an hour of crap, they say “Are you ready?” Yes come on, I’ve been ready since I’ve clicked the Play button and I don’t need you to “tenderize” me like meat… and to think they started the video by saying “I promise I will spare you all the BS in this video and get straight to the point.” Go figure! Then he tries to make friends with us by saying “It’s payback time” (LoL). “Lets get revenge on the brokers and scammers that fooled us by working together” (LoL again). Cheap tactics.

Now here’s where they really think were stupid: they say that some traders and robots took advantage of doubling up a losing trade (Martingale) but brokers quickly closed this “loop hole” (yea, it was the Holy Grail and now we cannot use it any more… ohh, the pain) by limiting the trade size to 200 or 250 USD (Huh? Last I’ve checked brokers allow you to trade more but, whatever…). Ok, then they say that Martingale has been proven to NOT work. What? If it doesn’t work, then why would brokers want to close this “loop hole”? And then they say they’ve found a way to still use Martingale by opening positions across more than one broker. WTF? It doesn’t make sense! Here is a stripped down version of their story: Martingale works too well so brokers had to make it unavailable. Martingale has been proven NOT to work. They have found a way to use Martingale. Why would I use it if it doesn’t work?

Ok, then they go to say “The system cycles the trades so that brokerages lose money on their end in a randomized way” Say what?!? How is that achieved? What does it mean? Oh, no explanation? Ok, I’ll just take your word for it… because you are so awesome. In the beginning of the video he told me that the “scammers” are asking me to join certain brokerages in order to get the software. Then the software fails, blows the account and they split the money I’ve lost with the said brokerage. Of course he also assured me that he won’t use such tactics but now, about 15 minutes into the video (he probably thought I have already forgot), he tells me they have a list of recommended brokers that I have to open an account with. Also, I am assured they are not affiliated in any way… and I believe that; after all, I believe everything I read and hear over the Internet.

But in fact, for the second trade, we can not calculate 7.5% from 1000 because we don’t have 1000 (we already lost 25 bucks on the first), then we cannot calculate 22.5% from 1000, because we don’t have 1000 etc., etc. To think that guys who miss simple stuff like that actually created a trading bot that makes you rich is naive at least. And anyway, going with his version, if we are left with 675 and the 4th trade will be opened with 675, that means I could blow an entire 1000 USD account in just 4 trades if the 4th is a loser as well. Ah, but he assures me the 4th has a winning probability of 98.21%… but you know what? I don’t believe that because I am not sheep and I don’t believe you are either.

They Force Me to Withdraw – I Force Myself to Stop Laughing

The cherry on top is that they make you withdraw half of your profits once you double your account, otherwise the bot will stop working. The idea of taking out some profits is not bad in itself but LOL… double the account?!? Sure, where do I sign up? I just hope the video ends but nope, he throws more numbers at me, tells me how much money I will make after a year, blar, blar. But in fact I was wrong about the cherry on top. The real cherry is this: remember at the beginning of the video he said he will not show us screenshots of fat accounts? Oops, but he does! So in this presentation he told us he is not like others, when actually he did everything others do. Because of that and everything else you’ve read so far, let’s put the stamp of BullsH2t on this one and let’s not give these scammers more of our time, let alone our money!