Review of the Revolt Strategy for Binary Options Trading

I was waiting for the subway today. As it arrives at the terminal, I see that it’s packed with people already. I still decide to get in, knowing full well that it was going to be tight. Some people got on after me and there we were all packed like sardines. At the final stop, all the little sardines rushed out like a flood. It got me thinking about the points in a system when enough is enough and things change course. Enter: “The Revolt”.

The average directional index is an indicator developed by Welles Wilder in an attempt to discover trends and measure their strength. The AD, which is the yellow line below, is made up of two indicators: the Plus Directional Indicator (+DI), which is the blue line, and the Minor Directional Indicator (-DI), which is the red line. Those are just fancy names for what Wilder used to measure uptrend strength and downtrend strength. The +DI and –DI were then used to measure how ‘strong’ the trend was by seeing how fast the price movement made those

What Is “The Revolt” 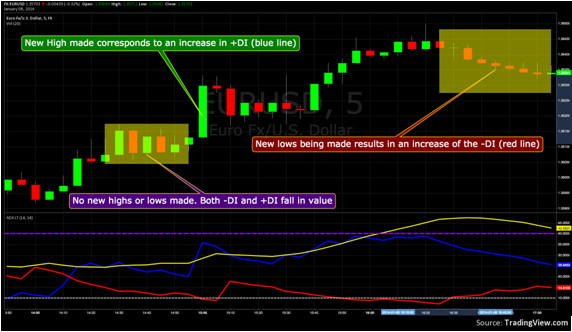 The Revolt is a system that tries to pinpoint exhaustion within a trend. The blue line rising indicates that there is a lot of buyer power and buyers are in control, but at what point have the buyers gone too far and exhausted their steam? It is at these moments that the sellers will revolt and take back the power.

How The Revolt Strategy Works

We are trying to pinpoint extreme strength from one side of the market by using a 14 period ADX and its component DI’s. If the buyers have been extremely strong, then it is assumed that the sellers must have been quite weak. This will be represented as redline falling below 10. If the blue line has fallen below 10, we take this as a sign of buyer weakness. We will be entering buy trade when the buyers are at their most weak as this will be the time for them to revolt. And of course, a sell trade will be entered when the sellers are at their weakest. 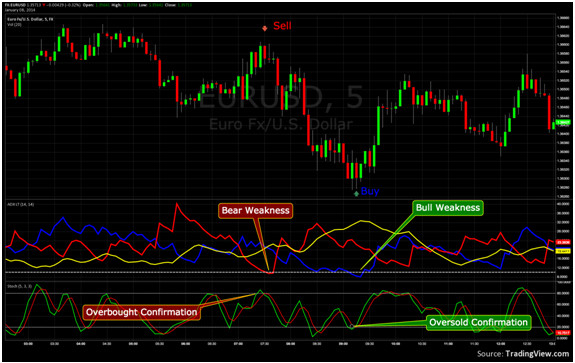 The DI below level 10signal will be confirmed by the stochastic oscillator (5,3,3). We are looking for a crossover in the overbought zone (80+) or the oversold zone (20-) at the same time as the DI’s are indicating extreme weakness. These will be the spots in the market where revolt is most likely to occur.

This system doesn’t really suck as much as it simply doesn’t work in certain market environments. Trending markets to be more precise. The seller weakness that should be a sell signal, will be more like a trap, if the signal takes place in a uptrend market. The sell signal will simply exist because of some momentary dip in the trend that will probably reverse back into the uptrend. I would advise trading this system in ranging markets, which you can define as you see fit. I’m not saying it’s a bad idea to trade it in trending markets, all I am saying is it’s more dangerous and you should set the expirations on your trades to much shorter time horizons.

Why This System Does Not Suck

The system does not suck for the reason that it uses simple yet effective logic as the basis for its trades. We place buy trades when the sellers have gone too far on their selling spree and the market is now oversold. We place sell trades when the market is overbought. The simplicity allows traders to make quick decisions about their signals without getting a bunch of convoluted and confusing information. Two indicators. That’s it. We are simply joining the revolution in times of excess.

Last Words on The Revolt – Yay for the Revolution!

History will show that oppressive and excessive governments will always be overthrown by a revolution of those not in power. “The Revolt” simply takes into account this natural human tendency for excess and rebellion. It’s a pretty good system for traders who have a decent knowledge of the workings of indicators and technical analysis. Since it is exploiting the inherent tendency for excess, signals from the system can be found on any timeframe, making it quite flexible. It’s a great and simple way to revolt your way to a profitable account.