Risk sentiment showed improvements last week with several different asset indicators reaching long term highs.  In stocks, the Dow Jones Industrials and the S&P 500 are seen at 5-year highs, and this is being matched in carry trade activity with the Japanese Yen showing is longest period of weekly losses in more than 30 months.  The USD/JPY is now trading at levels not seen since June of 2010 and this is a broader suggestion that market sentiment is bullish despite the relatively sluggish results that we have seen in recent macroeconomic releases.

The latest example of this could be seen in last week’s Chinese GDP figures, which showed a rising growth rate of 7.9% for the fourth quarter of 2011.  Market reaction to this release was positive, as analyst expectations were calling for a slightly slower rate at 7.8%.  But while this was taken by markets as a positive, the longer term perspective is not quite as rosy.  In the graph below, we can see that growth rates in China are still slowing significantly, as this has major implications for binary options traders in certain markets (oil markets would be a key example). 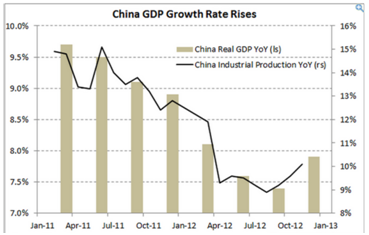 So, the main question going forward will be whether or not this latest bullish momentum can continue.  On the positive side, we have a potential agreement with respect to the next vote in the US Debt ceiling, and a wide majority of the corporate earnings released this season have surpassed analyst expectations.   This far, roughly 70 companies have reported their profit performances for the 4th quarter of 2012, and nearly 75% of those releases have been better than market estimates.

These positive surprises have been enough to distract traders from the fact that the initial expectations were dismal at best but we will need to see some negative earnings headlines before any real downside moves can be expected.  Next week, we can expect major increases to stock market volatility, as Apple (AAPL), Google (GOOG), and 80 other companies report earnings next week.  On average, corporate earnings expectations have risen from the very weak 2.5% growth rate seen initially.  These average expectations are now calling for an overall rise of 3.8% for the fourth quarter and so the next major move in markets will be determined by the outcome of these releases.

My Trading Recommendations in 50 words:

1. Last week’s call on the EUR/CHF was based on the previous central bank price floor enacted at 1.20 and the recent surges to the upside help to validate the market’s position in this area as well.  This CHF weakness will translate into the USD/CHF as well, and if we see a drop back into 0.9290 I will enter into 1-week CALL options as the longer term trajectory should remain in positive territory.

2. I will look to avoid long term stock plays with the large number of earnings releases scheduled next week but if the positive numbers continue, carry trades like the AUD/JPY are well-positioned for another run higher.  This will be a longer term trade, with monthly CALL options taken at 94.20.