I will be honest. I did not know much about Elliot Waves before I began this review. I assumed, wrongly I might add, that they were a technical tool similar to using multiple moving averages. Boy was I wrong. Just shows you that what they say about assuming things is true. In reality Elliot Waves are a strategy that targets upcoming corrections in bull markets. The strategy is based on the Elliot Wave Principle, a detailed explanation of how mob mentality works as described by Ralph Nelson Elliot in his book, “The Wave Principle”, published in 1938. The theory and the book are very complex but basically lay out the nature of crowds, mob mentality and how changes in mass sentiment create patterns that are measurable and predictable. The theories he presents are well suited to the financial markets and have been included as a pillar of technical analysis ever since first publication. My conclusion: Elliot Waves are a method of trading above and beyond either tool or strategy the way Shaolin, Jujitsu and Karate are forms of martial arts. To embrace Elliot Waves, to become an Elliotician, is life long pursuit.

What Exactly Are Elliot Waves?

Elliot Waves are a theory of the market that all major movements such as bull and bear markets can be expressed in waves. The waves are measurable, repeatable and predictable leading to multiple opportunities for traders. Each wave comes with its own “personality” and characteristics that lend traders an insight into what to expect from the market. There are basically 2 kinds of waves, each divided into smaller sub waves. The primary waves are the Impulse Wave and the Corrective Wave. Each Impulse Wave is then followed by a corrective wave. During the Impulse Wave there are 5 sub waves in each movement; in the case of a bull market there are 3 up waves punctuated by 2 smaller down waves. Corrective waves each have 3 smaller sub waves; 2 down waves and one up wave. As each wave unfolds targets for the next wave can be predicted. This form of analysis is closely related to Fibonacci Retracements, also pioneered by Mr. Elliot. In fact, in his work a proper Fibonacci Retracement must begin with a valid Elliot Wave starting point. 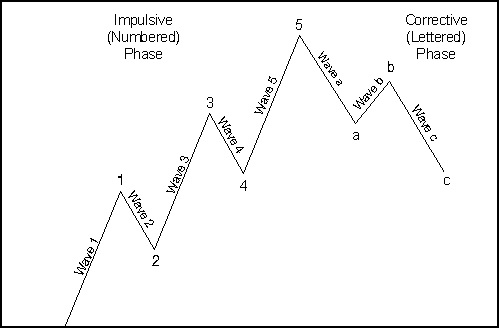 Each wave within a sequence will also fall into the same basic structure. Let’s take a look at a bullish impulse wave for example. Each bullish impulse wave consists of 5 waves. Three up waves and two corrective down waves. Each of the three up waves will also consist of 5, much smaller, sub waves. Likewise, each of the two corrective waves in the greater impulse wave will also consist of three smaller sub waves; two down and one up. Using this method it is possible to use Elliot Waves in greater and smaller time frames, getting an idea of where the market is positioned in terms of secular waves, primary waves, secondary waves and on down to the nearest terms. One rule repeated over and over again in the literature I have read is that these waves, like Fibonacci, are not specific targets or guarantees of market movement, simply areas and projections of where signals are likely to occur.

Elliot Waves might suck because it is a complex theory to master. Finding the actual start of an Elliot Series could prove problematic for newbies and lead to some frustrations. Not to mention that the overall analysis is highly subjective once you do have a starting point. It will take time to fully understand and be able to use this strategy but what successful trading strategy doesn’t?

Why Elliot Waves Do Not Suck

Elliot Waves do not suck plain and simple. It is an advanced strategy based on market psychology and mob mentality that is highly intuitive. Much like Fibonacci trading this method is a discipline that will take time to fully master but also one that you can use on a daily basis. The break down of the waves is also very similar to Fibonacci trading and provides highly accurate target levels at which signals are likely to occur. Not to mention that once you get into the groove of trading the waves you will be able to break down the smaller waves into smaller waves and get more and more profitable entries.

My Last Thoughts On Elliot Waves

Elliot Waves are more than just a strategy or tool for traders. They are a way of life and a discipline within trading that sets it apart from the norm. While complex, the theory is straightforward and once mastered will provide a lifetime of successful trading. The caveat is that it is a strategy and method of trading that will take some time to master and may not provide he instant gratification that simpler approaches can give. In the end I am impressed with the system and the theory and think it is a great way for new traders to begin studying the markets as well as a way for experienced traders to enhance their current analysis techniques.

posted in Strategies Suck And Dont Suck • 1 Comment
One Response to “Elliot Waves Strategy – Targeting the Bull Markets”
Sort By:
Click here to cancel reply.
Thanks for Submitting!