Homegrown Strategies – Pinky and The Brain for Binary Options

Woke up this morning, had a cup of coffee then started to weigh my options for the day. In the red corner I had playing Grand Theft Auto V on PS4 all day and in the blue corner – writing an article in which I give you the secret to Binary Options trading. It’s obvious I didn’t play GTA, but now you’re probably wondering if the article you’re reading is the one with the secret or just a regular one. Yeah, it’s the one with the secret so open your eyes because I’m not gonna do it again.

What is “Pinky and The Brain” and How to Use it

Pinky and The Brain is a cartoon about two mice who try every day to take over the world. Pinky is stupid and slow while The Brain is… a genius. I don’t know what their plan is after taking over the world and actually I believe they don’t know either (probably have all the humans bring them cheese offerings all day). Connection with binaries – none, but I liked the show and this strategy has to have a name. Besides, I ran out of Japanese words I know. OK here’s what you’re gonna need: Meta Trader 4. If you don’t know how to get it – tough luck because I am not gonna tell you again. Join the forum and ask, google it, figure it out. Next you will have to determine the trend. You can use any means necessary, any trend indicator that works for you but for the purpose of the explanation we are gonna use a 200 Simple Moving Average (SMA). Got it? Cool, next we need something that keeps us out of periods of flat movement and for that purpose we will use the Moving Average Convergence Divergence (MACD) with default settings. I need a new paragraph so I will do that in the middle of

This sentence just because I am about to give you such an awesome indicator and you will forgive me for not following the rules of paragraph splitting. Now that we got that out of the way, put two levels on the MACD: one at 0.0003 and one at -0.0003. If you don’t know how to do it – tough luck again. When the MACD histogram is inside those levels, it means the market is flat and price is going nowhere but it also means that it can shoot in any direction, without warning. Don’t trade when you see that because you’ll get slaughtered… or rather your account will.

These levels can be adjusted to fit better the volatility of each pair; find a ranging period and see what limits are hit on the MACD and use that for levels. Also, JPY pairs will need separate adjustments (delete some zeros). If your MT4 broker only offers 4 decimals, you will have to adjust again but I am sure you will figure it out.

Until now we have trend identification (200 SMA or whatever you like and trust) and range/flat market identification (MACD with levels) but nothing out of the ordinary. Where is the secret? Ah, for that you will have to watch all “Pinky and The Brain” seasons. The secret is revealed in the end. And no, don’t just watch the final episode because it’s a giant puzzle which can only be solved if you watch them all. But since I am sure you won’t do that, I will give you the answer: you will have to build your own indicator – well, actually it’s mine and you will replicate it. Actually it’s not mine because I didn’t code it… ah just forget it. Here’s how to do it: get your hands on a RSX – yeah, google it because I am not gonna give it to you. Once you have it, attach it to a chart, then open the Navigator and drag a Moving Average on top of it. The setting is 9 – Linear Weighted and applied to Previous Indicator’s data (namely to the RSX). For some unknown reason, dragging and dropping doesn’t work the first time (at least on my MT4) so try doing it again, until it works. 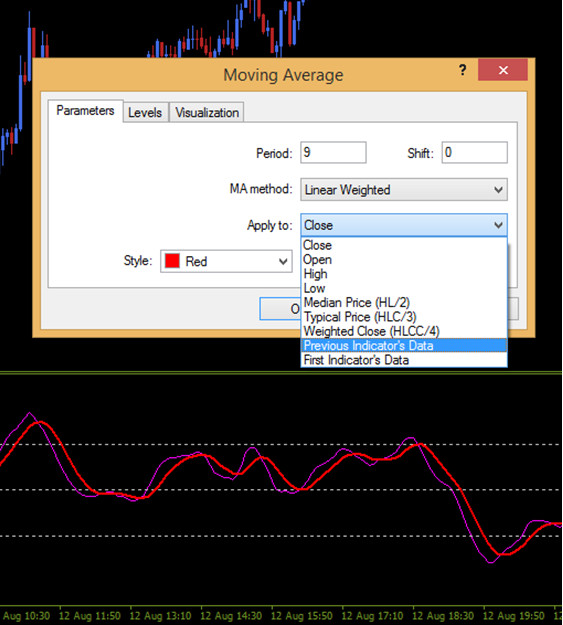 Congrats for getting this far. Now you have a new, awesome indicator. In fact it’s so awesome that it could almost be traded as a standalone tool:

But the market doesn’t always move like in the picture above so we need additional filters like trend and flat market recognition. The complete system will look like this:

For a Call you need price to be above the Moving Average, MACD to show good momentum (not trapped between the 2 levels) and the RSX to cross the 9 LWMA going upwards. Before the cross, the RSX has to go below its 50 level and it’s even better if it goes below 30. Reverse the rules for a Put.

Why does Pinky and The Brain Suck?

It doesn’t. Plain and simple. You will need to have some knowledge about how the market moves, what a solid trend is and what are the signs of exhaustion. It’s not a system or tool that can be used mechanically – match the colors and trade or wait for an arrow to blink so I guess the only time it sucks is when it’s not used as it should.

Why Pinky and The Brain doesn’t Suck

Read the article again if you didn’t get why it doesn’t suck. Really!

One thing should be very clear: do not risk your money just because something works for me. In no way I am trying to convince you to use this as a complete system or the RSX + LWMA as a standalone tool. Also, keep in mind that the pictures are cherry picked for the purpose of explanation. That being said, the RSX + LWMA is one of the best oscillators I know of and I am not just saying that because I “built” it (it was probably by mistake). If you come up with new ways of using it, join the discussion on the Forum.

posted in Strategies Suck And Dont Suck • 9 Comments
9 Responses to “Take Over the Binary Options World with “Pinky and The Brain” Strategy!”
Sort By:
Click here to cancel reply.
Thanks for Submitting!