Tips From The Geek Recap: March-ing To Profits!

Volatility persists in the market but savvy traders can make profits, read on to see how savvy the Geek is… or not!

Well, one thing is certain. Volatility persists in the market be it equities, indices, commodities or currency. The reason? Too much uncertainty, centered primarily on the FOMC but the blame lies with all central banks and their ongoing efforts to “support” the market. What they are doing, trying to spur economic growth in their respective countries, amounts to a defacto currency war that has traders around the world wondering how safe their money is. I can honestly say that we shouldn’t hold our breath waiting for this to end; the US will be plagued by random and contradictory comments from FOMC members, the EU may or may not need more QE depending on whether you believe Draghi or the data and Japan, well Japan is the most desperate and may do something unexpected and drastic. The good news is that savvy traders can use the volatility to make profits so long as they can dodge news releases and are prepared to trade actively.

The March run-down goes like this; there were four Monday’s in the month, this means 20 trades. Of those 20 trades I won 13 and lost 7, not counting some short term trading I did during the month. My win rate comes out to be 65% with a net return on trading of 20.25%. On a week to week basis I averaged 3.25 wins; 3 weeks I won 3/5, 1 week I one 4/5. In terms of Communitraders ranking I slipped to 11th over the trailing 12 months but that is due more to the high quality of traders we are getting as much as anything else. My 12 month win rate has risen despite the fall in ranking and is now 59.07% with a net return for the Geek account of 23.81%. I don’t care what my 12 month ranking is with numbers like that to back it up, and anyway, I’m now 5th in the 30 day ranking with a 67.14% win rate. 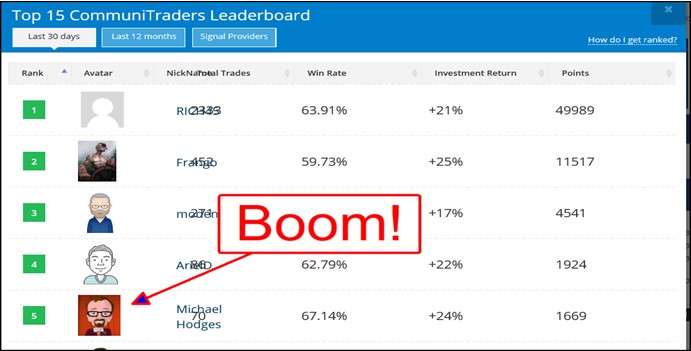 What Happened In March

March was, as I said, volatile. The major indices made a nice move higher, if choppy, but everything else was a little hit or miss depending on how the data came out. Gold prices remain bullish but pulled back from its high and enter a consolidation zone. Oil was up, down, up, down and up on rumors swirling about the OPEC production cap. The dollar was going a little crazy with the data and the FOMC and all the commenting from Fed officials. Altogether making it a hard month but totally tradable if you keep up with the news.  If I’ve said it once I’ve said it twice, the news and fundamentals are key to trading successfully.

This is the week the ECB had their meeting and surprised the market, in a surprising way. We’d expected some easing and the bank exceeded expectations, usually what would have made the euro weaker, but they added on the idea this would be the last easing which proved to support the euro and move it higher. I had been expecting the euro appreciate based on the statement, I just didn’t expect the statement to say what it did. I won 3 out 5 trades this week including the eur/usd.

This is the week of the FOMC meeting. I’d been expecting them to do nothing, their surprise was a more dovish stance on the economy which helped to weaken the dollar versus the euro even further. I also won 3 out 5 trades this week; trades on gold and oil failed. Oil because of the back and forth of sentiment as supply issues clashed with the possibility of a production cap.

This was a relatively quiet week, not much news came out and not much data. Earnings season was quiet, the oil patch was kind of quiet, the dollar remained low so basically a decent week. I won 3 out 5 trades once again, losing on the SPX and gold. The SPX pulled back from resistance, likely due to end of the quarter selling and portfolio repositioning. Gold was just being a little crazy after entering consolidation.

This was a big week for more than one reason. It was the end of the month, the end of the quarter and there was quite a bit of data. The data was OK to low, basically in the sweet spot for right now with maybe a negative bias. Regardless, trading was more active and trends came back into play, helping me achieve a 4 out of 5 win rate, the best week of the month. The only trade I lost was against oil because the rumor of production cap was fading from importance, and I was still bullish on oil.