Momentum is one of the most basic forces of the market place. The market place is a mob of people, a mob of people are easily influenced, those easily influenced will follow the leader, the more people who follow the leader, the more prices move, the more prices move the more MOMENTUM the market has. Momentum can be described as an increase in people, or as an increase in price, and both can be measured. MACD is a momentum indicator that measures the movement of price and is one my favorite indicators. In fact, MACD and this simple strategy are foundations of my personal trading style. This article outlines my simple strategy for using MACD to make short term trading decisions.

MACD stands for Moving Average Convergence Divergence, it measures the difference between a slow and fast moving average. When the two averages move together they are said to converge, and when they move apart they are said to diverge, hence the name. The formula creates an oscillator style indicator with two lines, the moving averages, that track above and below a center line, 0. The two moving averages generally move together but the slower one will cross above and below the faster one, creating signals.

There are two ways to view MACD and for this I use both the simple version, which is the oscillator, and a slightly different view called the histogram. They give the same signal but I like the histogram better. This is because the histogram shows the difference between the two moving average regardless of where the oscillator is in the range and is thereby a sign of strength. The basic strategy is trend following and uses two time frames, daily and hourly. This is a momentum strategy so that is the best way to do it. If you want even more precise entries you can move down to 30 minutes but I think this is unnecessary. If you look at the chart below you can see that there are at 8 good entries over the course of ten trading days.

When momentum is up on the daily charts I use the bullish crossovers as signals to get in. When momentum is down on the daily charts I use the bearish crossovers as signals. Additional signals occur any time the histogram begins to peak in the same direction as the oscillator ie if the oscillator is pointing up and the histogram is strengthening then the signal is very bullish and you can enter. 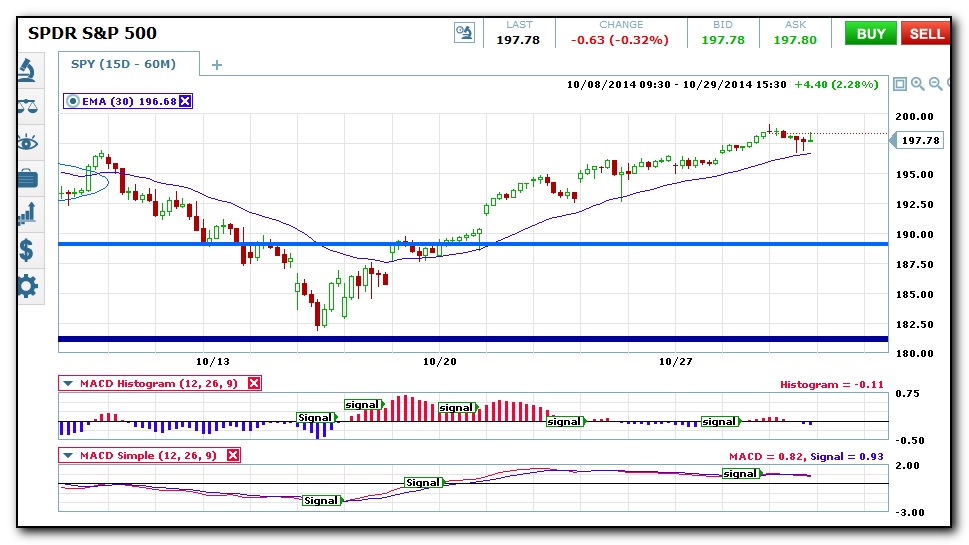 Why This Strategy Does Not Suck

This strategy does not suck because it works, I know. It is a, the, simple use of one of the most widley recognized indicators in use today. It is a trend following strategy focused on simple trend following entries and one that can be use by newbies or pros alike. It requires very little additional analysis for short term trading and can be used to pinpoint the best entries for long term trades. The best signals come on zero line crosses but slow/fast MA crossovers and bullish/bearish increases in the histogram can also be used as signals.

It might suck because all strategies suck sometimes. This basic use of MACD does not include support or resistance which can both provide headwinds to trading. The good news is that MACD can also be used to find those support and resistance levels of importance but that is for another time. It also might suck because determining expiration on a trade to trade basis may be tricky but you can rely on signals lasting for at least 1 to 2 bars following the signal.

Obviously I like the strategy, it’s mine. MACD is fantastic as a momentum and strength indicator and works well with other tools. This is why I have incorporated into my own technique. You can use it by itself like I have described here and have a lot of fun with it or use to build a more advanced strategy with. I like to add an additional oscillator, stochastic, in place of the simple MACD and find that works extremely well.