Developed by Gerald Appel in the late 1970’s and commonly known as MACD (but you can call it Moving Average Convergence Divergence if you wanna sound like a nerd), this tool can help us find good trading opportunities by gauging the strength of a move and also giving us indications about the direction we must trade in. So we have a tool that tells us where price is going and how strong it moves. Sounds pretty good, right? Well, let’s see how it works and if it can deliver what it promises.

How Does MACD Work and How To Use

MACD is an indicator available for free on most trading platforms like Meta Trader 4, NetDania’s ChartStation or TradingView; it is widely used, so finding it shouldn’t be a problem even if you don’t use the platforms I mentioned. However, don’t expect to find it on the platform of your binary options broker because those guys are notorious for the lack of technical tools/indicators. Ok, moving on: the MACD is formed of two Moving Averages and a Histogram. The MAs are not your regular MAs of price, but we won’t go into the details of explaining the calculation of those MAs because, believe me, it can get boring. All you need to know now is that one of them is faster than the other. The Histogram just shows the distance between the two MAs at any given moment and this comes in handy for the times when we need to know how powerful a move is. A bigger histogram suggests that the two Moving Averages are moving apart or diverging and a smaller histogram indicates that the MAs are coming closer together or converging, hence the name of this tool – Moving Average Convergence Divergence.

How To Trade With The MACD

So, let’s recap: a cross of the two lines will give us the signal to trade. When a bullish cross occurs, a Call is in order and a bearish cross must 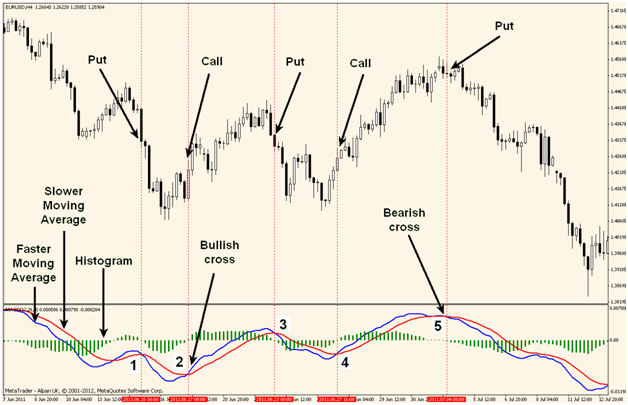 You can see that sometimes the Histogram almost disappears; that coincides with the cross of the two Moving Averages, because at the time of the cross, the distance between them is zero. At point “1” we can see a Bearish cross, with the faster, blue line crossing the slower red line from above and going down. If you were using a one hour expiry time, given that this is a 15 minutes chart, price at expiry time would clearly be lower than the opening price, thus a clear win. You can see that the other signals are also good ones, depending of the expiry time. A cross in the opposite direction of our trade would indicate an early closure of a trade and maybe even a counter trade, taking the new direction indicated by the MACD cross. Please, keep in mind that the examples above are cherry picked and you will definitely encounter situations where MACD will fail miserably and that’s why I would suggest using another confirmation for a trade. I just don’t trust the MACD enough to use it alone. If there is no additional confirmation, it’s better to stay on the sidelines and let your account live to trade it another day.

Why does the MACD Suck?

Being formed of two Moving Averages, which are lagging by nature, it also lags big time behind price, especially in ranging periods, or in times when price moves strongly in one direction and immediately reverses. It just can’t keep up with the speed of price and it looks like a truck trying to compete with a NASCAR racing car. To put it simple, it’s just too slow, but maybe there is hope for it: let’s see why it doesn’t suck.

I just told you that the MACD is too slow…well, this can also be a good thing sometimes: imagine you are in a strong trend that is about to retrace. If you were using a faster tool, that would get you out of the trend, signalling a trade in the opposite direction, but the MACD lines would just come closer together, signalling a momentum decrease, not a counter trade. The market conditions sometimes fake out even the slow moving MACD, making it cross, but that just shows us once again that there is no indicator that gives us perfect signals all the time.

Wrapping It Up: Should You Use The MACD?

Oh yeah! But, never alone. In other words, don’t slap a MACD on a chart and blindly follow all its signals, Putting and Calling left and right because, as I said above, this indicator (just like every indicator) is prone to false signals. Instead, try to incorporate the MACD in a system, a strategy with clear rules; if you don’t want to create your own strategy, try using one that’s already been explained by us: Parabolic and MACD or a ‘Homemade’ system – The Geek’s Simple MACD Binary Options Strategy. And one more thing: the more knowledge and trading skill you have, the better you will be able to use any indicator or tool, including the MACD because you will learn to spot opportunities better and to avoid bad trades.

posted in Trading Tools Suck And Dont Suck • 2 Comments
2 Responses to “Moving Average Convergence Divergence (MACD) – Not as Complicated as it Sounds”
Sort By:
Click here to cancel reply.
Thanks for Submitting!