Look, it’s simple: with this software you are gonna make half a million dollars every month, on autopilot! You don’t have to do anything, just sit back and collect the money. Sounds good? No, it sounds like the scammers are not even trying hard anymore; sounds like they think we will believe anything they throw at us so why not tell us we are gonna make half a mil each month? After all, we are just sheep that do everything they are told… well, I’d like to believe that’s not true, so keep on reading and avoid cheap scams. If you don’t know what’s a binary options robot yet, you might want read this article first – What is a Binary Options Robot?

What Is Lie Detector Millionaire And How To NOT Use It

Looking at the Lie Detector Millionaire, you know this guy goes over the top, making claims that are hard to believe if you are at least sober. He was an internet marketer, selling scam software, autopilots and whatnot but his conscience started bothering him and now he tries to make up for all the money he “stole” by giving the world this Lie Detector Millionaire (aka LDM) software that will make people rich. So, he is no longer an internet marketer but he needs 50 testers to help market his new software (LDM)… slap me if that’s not contradicting. Of course, the new software is free but guess what: you have to fund an account with their recommended broker (sounds familiar so far?), none other than the very trustworthy *cough NOT cough* Big Option. Of course, you will make tons of money with LDM and he is willing to prove it by taking a lie detector test (hence the marvelous name of the software). Guess what, the lie detector test “proves” that he is not lying and that he made 5 million dollars in a year using the Lie Detector Millionaire software… and we believe the results of the test are real because, remember, we believe anything. According to him, the guy who administers the test is a retired military general or something like that but if you’ve watched at least a handful of movies in your life, you will easily see that both of them are acting. Also, there’s no trace of these two guys on the internet and you would think a successful internet marketer would leave some traces on the world weird web. Ok, so here’s what we have so far: a retired scammer wants to make up for all the bad things he’s done and offers the world a way to make half a million dollars per month, free, without any trading skills required and without losing a single trade. Amazing!!! 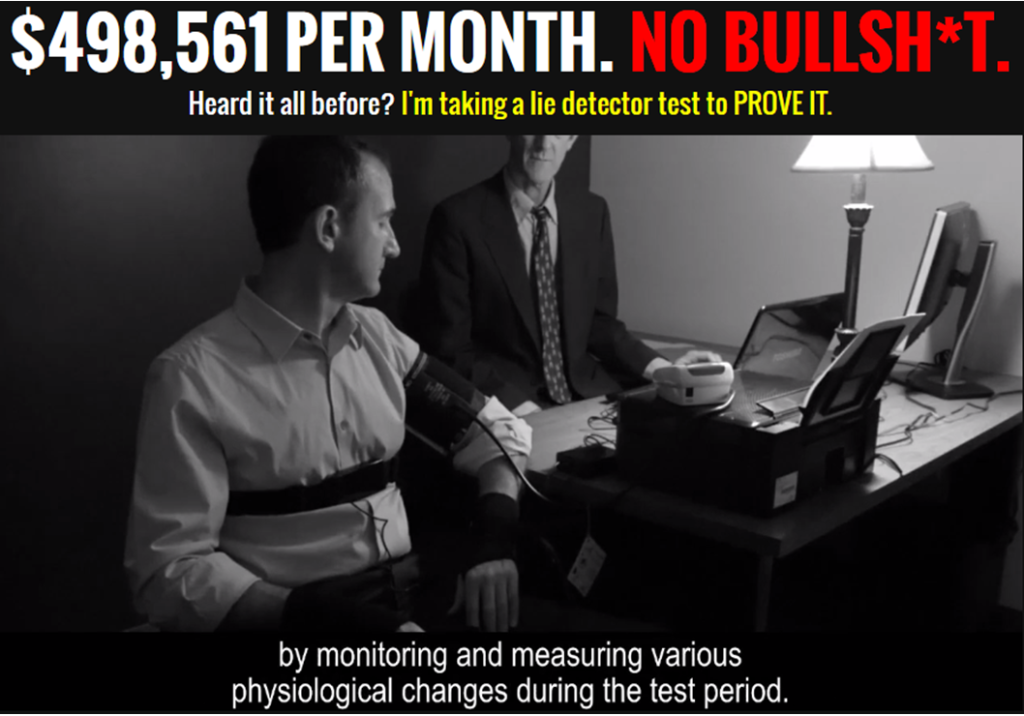 He also goes to say that he doesn’t have any programming skills, he is not a mathematician and not even a trader. Then how did de manage to build the Lie Detector Millionaire software? Well, that’s another great fairy tale. Here goes:

If you ask me, Trader X is an imaginary friend, living in a land where you milk cows and money falls down, tree leaves are actually thousand dollar bills and the cheapest car is the Bugatti Veyron. In fact, it’s so cheap that you get it as a bonus when you buy your very own Boeing 747… and everybody owns a Boeing in that land. If you ask the guy who is trying to scam you, he says Trader X is an amazing coder, sought after by all Silicon Valley companies, also an amazing trader and… wait for it… he designs programs that predict the future!!! Oh yeahh! That’s what I’ve been waiting to hear all along. If he can predict the future, I want his programs, I want to make money, I am a believer, take my money. Ah but wait, it’s free. Then where’s the catch? Well, just how most scams work out there, Lie Detector Millionaire wants you to deposit money with their recommended broker – in this case Big Option – and you will start making money in no time. This raises a question: why would a broker want you as their client if you are going to make 500K each month? That money comes out of their pockets, so are they crazy? Do they want to go out of business? Or maybe the Lie Detector Millionaire actually loses money and that means the broker is going to profit? Yea, the latter sounds more like it. Although brokers want to make us believe otherwise, it is a known fact that most of the time we trade against the house, meaning that what we win comes out directly out of their pockets.

There’s only one possible conclusion: the Lie Detector Millionaire is a scam and we recommend you stay far away from it. Five Hundred Thousand US Dollars per month, no losing trades, free of charge – all this coming from a guy who admits he was a scammer and tries to prove all of it by allegedly taking a lie detector test. Come on, what more do you need to stay away? But anyway, you know what I always say: it’s your money and you decide what to do with it, so if by any chance you invest money, trying to trade with this software, please let us know how it went.