Oil is probably the most commonly traded commodity and it always had a special appeal to traders. It moves strongly, it is highly affected by geopolitical events and also by supply and demand so trade opportunities are almost always there. The only problems are to know when to trade and which direction to take. If these questions could find an answer, a trader’s bank account will never be empty again. I said that Oil is affected by a lot of factors, but by using Binary Options we can profit if the price is going up or down as long as we can identify its direction soon enough. That’s what today’s system tries to accomplish so let’s what it’s all about.

How to use the US Oil Trading System?

First, read more about trading binary options commodities. Second, this strategy is one of the easiest I’ve seen in a while but you shouldn’t think it doesn’t work just for that simple fact. Basically it’s a trend following strategy which makes use of two indicators to identify trend and the retracement which will be followed by trend resumption. In other words, price moves strongly in one direction, then moves in the opposite direction and when the initial direction is resumed, we enter the trade. To accomplish that, the strategy uses 2 custom indicators: TCCI which is a Moving Average based indicator and “The Oil Biz” indicator which places an arrow at our point of entry. Both indicators are available for download at the bottom of the page and the strategy was presented on forexstrategiesresources.com but Janus Trader. Once you installed the indicators on your Meta Trader 4 terminal, here’s how your chart should look like: 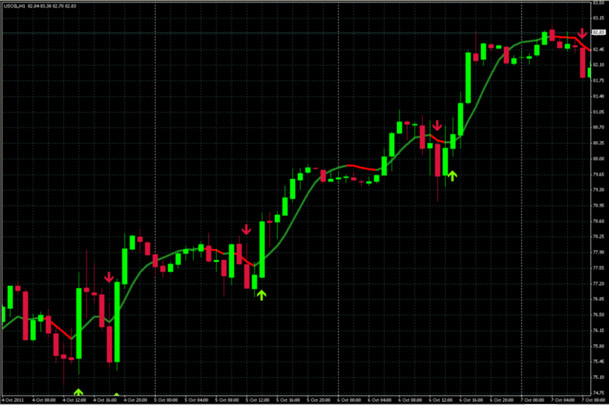 The line on the chart is the TCCI and as you can see it looks like a Moving average with changing colors; the arrows are printed by The Oil Biz” indicator. For a trade according to the strategy we will need both indicators to show the same color. The original author insists on a special condition which was pretty hard for me to understand at first: “A trade is confirmed if the TCCI is green both sides of the candle with an up buy arrow or red both sides of the candle with the arrow…” I don’t really get how the TCCI can be red or green “both sides of the candle” but after some chart watching I think this is what he is saying: sometimes the TCCI will change on the same candle the arrow appears and this will make it look like half of the candle corresponds to the green zone of the TCCI and half to the red zone. Those signals should not be traded. I believe you will understand better once you take a look at your charts but until then, let’s see a summary of the rules:

Expiry time: Unknown at the moment but I would recommend a pretty long one.

Why does the US Oil Trading System Suck?

I have heard about and used probably hundreds of indicators, but not once I encountered “The Oil Biz” or TCCI. That being said, I don’t feel comfortable at the moment with the strategy for the simple fact that I don’t like using indicators I never heard about. I am not aware of any re-painting issues but that could be a problem. Also, I believe an additional trend filter is needed because the way the strategy is arranged at the moment, you will end up trading the retracement, not the trend resumption.

Why the US Oil Trading System doesn’t Suck?

It’s easy to follow and to back test, especially if the indicators don’t re-paint. The signals on my charts look good but I must admit I have seen better results. But even if the results are not outstanding, nothing beats a consistent strategy. So, it’s okay to have losses as long as you will have more In the Money trades than Out of the Money and this happens on a regular basis. It’s true that big profits will not come as quick but if they come, I would welcome them with open arms.

Wrapping it up – The Oil Rush has Begun

This strategy was originally developed for Oil futures and that type of trading allows the trader to manage his money better and go for a higher risk to reward ratio. That means the trader can lose for example 2 trades and make up for the losses with a single winner but we don’t have that luxury in Binary Options, unless we double our initial trade, something I definitely won’t do and I don’t recommend you to do. The strategy is not the most accurate I’ve seen and its real power comes from the fact that it uses a good risk to reward ratio so I have my doubts about applying it to Binary Options, but give it a try on a Binary Options demo account and see how it feels. Good Luck if you need it.