How does the Double Stochastic Strategy Work?

The strategy works by using two stochastic oscillators to set trend and pick entries. For the first one, select the levels (21, 9, 9) where 21 is %K, slowing is 3 and %D is 3. You should set the second oscillator to (9, 3, 3). The standard levels for oversold is 20 and for overbought 80. The author, Edward Revy, recommends we use the daily charts for our signals because it’s more accurate. The entry rules are as follows; when the (21, 9, 9) stochastic lines crossover it signals the beginning of a trend. This is when you need to look at the Stochastic (9, 3, 3) to identify entries depending on the trend direction. 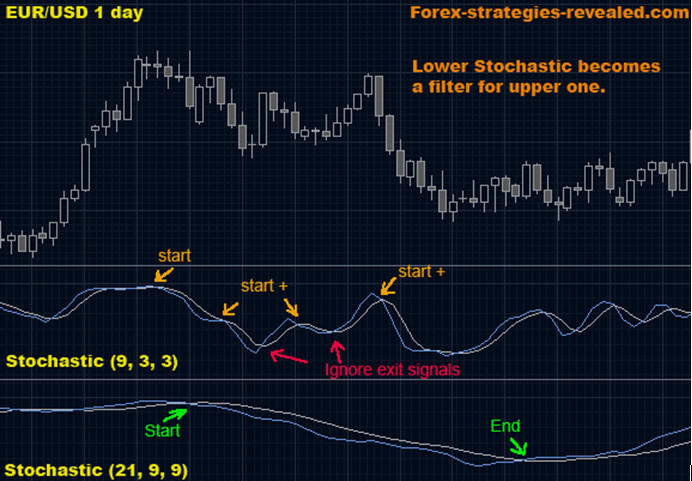 In the picture above, look at the green text that reads “start”. This is when Stochastic 21 shows a bearish crossover. You are now supposed to enter a put option every time the Stochastic (9, 3, 3) also indicates a crossover, which in this case it does four times. The orange “start” mark those four entries, but one looks like it might be a little early. Only trend following entries are taken, until the (21,9,9) stochastic signals a new trend. There are several other line crosses on the (9, 3, 3) Stochastic but we must only trade in the direction of the major trend defined by the stochastic with the higher settings.

When the (21, 9, 9) stochastic shows a crossover where %K crosses %D from below the level 20 oversold line, it signals the start of an uptrend. You can now enter a call option every time the Stochastic (9, 3, 3) also indicates a line crossover where the blue line crosses above the grey line from below but it doesn’t need to be oversold.

When the (21, 9, 9) stochastic shows a crossover where %k crosses %D from above the level 80 overbought line, it signals the start of a downtrend. You can now enter a put option every time the Stochastic (9, 3, 3) also indicates a line crossover where the blue line crosses below the grey line from above but it doesn’t need to be overbought.

This Forex strategy does not offer expiries but since we use the daily charts Irecommended that you trade end of the day or week expiries. If you don’t like to wait that long for a signal you can try this on a lower time frame but the Author suggests you stay above the hourly charts.

Why does the Double Stochastic Strategy Suck?

There are a few downsides and you probably already guessed what they are. Waiting for signal on the daily chart is one of them because it can take weeks before you can confirm a trend. The second issue is that we don’t know about expiries so a great deal of testing is required. Finally, you can expect some false signals here and there because sometimes fake crossovers occur due to the previous trend not being completely over yet.

The stochastic oscillator is an accurate tool that has many functions. As I mentioned before, when you get comfortable with it, you will find it has many uses. Finding trends, S/R areas, highs and lows in the market and oversold/overbought positions to name a few. The main reason this strategy does not suck is because we will always trade with the main strong trend, using a higher time frame for confirmation. Although a few false signals will occur, the lower setting stochastic helps us avoid most of them. The best thing is that you can use it to trade short time frames down to charts of one hour.

Stochastic oscillator is a powerful tool and using two of them the right way, as in this strategy, just increases its power. We use one with a higher setting to find the major trend that we later ride using the one with the lower setting. So long as you keep the rules straight in your head, the strategy will perform well for you. For people who like longer expiries this is a strategy that delivers and it does work well on one hour charts. For the really short expiry lovers, I can’t say with certainty whether it will work or not but as I said before, it doesn’t kill you to try it on a demo!