“You’ve never seen one of these with a woman”. That’s one of the lines at the beginning of Quick Cash system’s promotional video. What’s “One of these?” Oh, you mean one of these scam videos with a woman? You are partially right lady, because some use female testimonials to fool newbies but never an entire movie! Regardless, after spending almost an hour to watch the video, I must admit that the Quick Cash system has one of the funniest and longest scam videos ever! It’s too obvious for us pro traders to see how fake it is but a desperate newbie could easily fall prey.

Quick Cash System Video – When does it Ever End?

The video starts with a lady, I call her Mrs. Boobage because she isn’t wearing a bra and well, just see for yourself… She arrives to a huge house that’s probably been rented just for this shoot. Next, she goes on telling a conspiracy theory about underground government agents and how they have a super-secret software that wins 99.99% of the time. Okay, at this point you should be smart enough to just laugh, knowing its a scam, and only watch the rest of the video because it’s pretty funny. I suggest, if you want to watch it, that you grab a beer and some snacks. 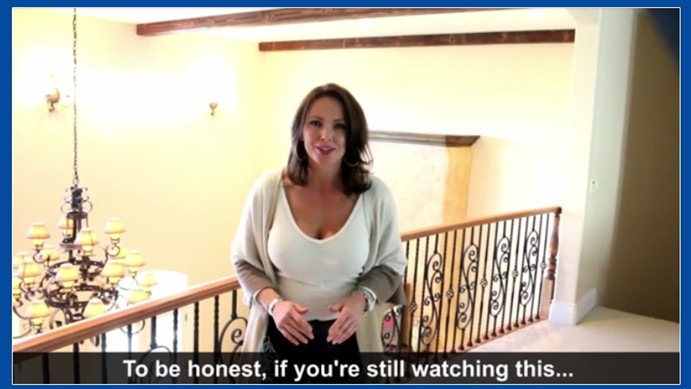 To be honest, if you’re still watching this… you are either doing it for fun or you are too stupid to see it’s a scam.

The secret software or the “formula” was (supposedly) brought to her attention by her husband that was (supposedly) a super-secret specials ops agent that left her a letter with the formula lol… Of course he had to run away and hide for stealing this formula from the government but it was OK to leave it lying around for her to find. What’s funny is that there is a flashback showing how sad she was and crying when her husband left… But wait, this doesn’t make any sense, you had a cameraman in your house before you even knew about the super-secret formula? OOoops!!!!

She says that the first time she tried the formula she made $1349 within five minutes, then immediately checks her bank account and sees there is already a pending deposit! LOL, come on, anyone who knows anything about brokers knows that is another big fat lie. Another big mistake is revealed when she talks about other binary option softwares that “they” have tested versus the Quick Cash system. The picture shows a negative balance (definitely photoshopped). Again, if you know anything about binary options you know that you can’t have a negative balance!

Later, a guy shows up and for a moment I thought he resembled Darryl’s evil brother. You know, Merle Dixon from the Walking Dead, lol. In the video, Mrs. Boobage tells him to register with BeeOptions.com and supposedly, a month later when “Merle” Skypes her, he shows his Paypal account that now is up to 129,000$. Guess what, BeeOptions doesn’t even accept withdrawals to Paypal. See people, even if you don’t get the big obvious fake scam video pitch, at least do your own fact check. Nowadays, Quick Cash scam works with BigOption and MasterOption. We already know from many testimonials from traders in our Community that BigOption is a fraud and we already know that MasterOption is known to work with scam sites.

The Same Old Hook; “Only A Few Spots Left!”

The website has been around for at least a year but she says it will be down in a few hours every time you watch the video. There is a countdown too, it shows there are only 4-6 spots available every time you visit, and then counts down to 1 and stays there to make sure you take it. And it’s free to boot, isn’t that nice. Part of their BS is that if more than 250 people use the system the government will somehow know and I guess they hunt you down or something. The thing about “free” in this case means that the people behind this scam get money when you sign up with the scam brokers they recommend, which you have to do to get the “free” system, so is it really free?

Secret agents and formulas, becoming millionaires in less than a hundred days. . . as usual, these claims play on your hopes, fantasies and greed. I hope everyone is smart enough to doubt allegations like these but some people just don’t want to take a minute to do their own thorough research. Take a giant leap away from the Quick Cash scam for the sake of your wallet and don’t get scammed. Because who knows, maybe you actually have a system that Russia and China would kill for? :P