The Coppock Curve, or Coppock Indicator or Coppock Oscillator, is a momentum oscillator based on rate-of-change first introduced by Edwin Coppock in a 1965 Baron’s article. Coppock, an economist by training, had been seeking a way to identify long term entries into the S&P 500 and Dow Jones Industrials and found a tool that is as useful as it is versatile. The formulation is based on something Mr. Coppock was told by an Episcopalian priest; the average amount of time people spend mourning loved ones is 11-14 days. This information was taken to heart and applied to market corrections, Coppock assumed it would take the market 11 to 14 periods to recover from sell-off.

What is The Coppock Indicator

The Coppock Indicator is a momentum based oscillator that was originally intended to predict long term entries using monthly data. It is based on rate-of-change and includes a weighted moving average to smooth out the data. The line is formed by plotting a 10 period weighted moving average of a 14 period ROC + an 11 period ROC. The results form a line or curve that trends above and below a central zero/signal line. The signal is simple; when the Coppock curve rises above the signal line from below you buy. The tool was not originally intended to be used for sell signals but it is well accepted to produce those with equal reliability as the buy signal. When the curve crosses below the signal line from above it signals a sell. 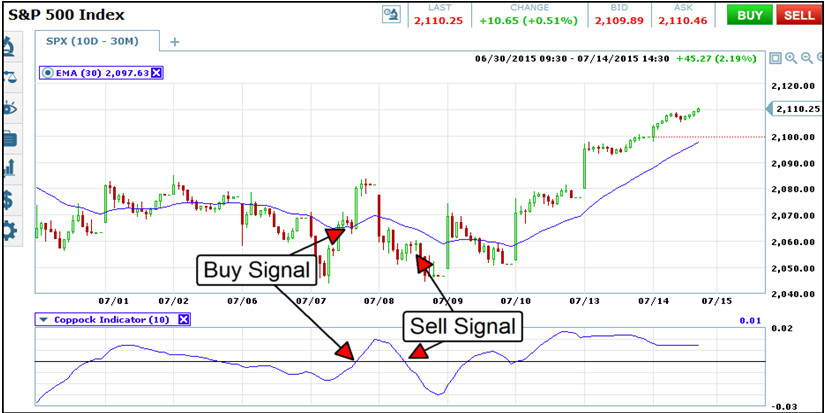 This indicator might suck because it was initially intended to only produce bull signals, was only meant to be used on the S&P 500 and Dow Jones Industrial Average and is based on monthly data. The bull signals thing isn’t such a big deal, some people like to trade only bulls signals and that is fine. The fact it is was meant for only two assets can be a problem as well but not something that means the indicator is useless. The fact it is using monthly data is the suckiest thing of all as it means you will get signals very rarely. In fact, if you look back over the last 50 years there have only been 4 signals using monthly charts, not at all acceptable for binary traders.

Why The Coppock Indicator Doesn’t Suck

This indicator doesn’t suck because it is highly versatile. Despite the original intent, this indicator can be used for bull and bear signals, can be used in any time frame and with any asset. It is in effect nothing more than a modified ROC which makes it a momentum oscillator and momentum oscillators are fantastic tools for day trading. Not only that the periods can be adjusted as well making it more or less sensitive and more or less useful in whichever time frame you are trading. On top of all this, the signal is very very easy to read. A zero line cross is it, when the curve crosses you buy or sell in the direction of the cross…. using an expiry appropriate for the time frame. I suggest 5-10 candles depending on asset and conditions.

My Last Thoughts On The Coppock Curve

I think the Coppock Curve will produce profits. In my testing it has been incredibly effective and is something I can recommend for newbies and pros alike. I think the tool is easy to use, easy to understand, has an easy to read signal and can even be used along with other indicators. Yes, the Coppock can give false signals, just like any other, so the use of another indicator or trend determining factor can help increase profitability. I have been using it on daily, hourly and 2 minute charts and think it works equally well in any time frame.

posted in Trading Tools Suck And Dont Suck • 1 Comment
One Response to “The Coppock Curve Indicator For Binary Options”
Sort By:
Click here to cancel reply.
Thanks for Submitting!