With this new technology you can now get Binary Options trading signals sent directly to your brain, no delays and no errors! Jokes aside, Binary Brain Wave is a new and automated signal providing system for “only” 98.99 USD. They have a very nice looking website too, http://www.binarybrainwave.com/. I should also say a few words about the service they offer, or I’ll just quote them instead; “When you become a member with us, you are part of our family and we will do whatever it takes to help you succeed.” Reminds me of that movie… What was it called again…? Oh, yes! “Blood in, Blood out”. “You f*** with my familia eh, you got to answer to me, here and now come on, toe to toe.” Okay, I’m done joking I promise, let’s just see what this system is made of!

How does Binary Brain Wave Work?

Yes, how does it work anyway? I found the exact same question on their website and thought my work was cut out for me. Unfortunately all they explained was how to take the signals. Sure, it’s kind of understandable, they obviously don’t want to tell everyone the secret behind their programming. So let’s excuse them for this and instead just focus on what we can find out about their product by ourselves!

Now let’s see how the Directional TRX works! This question was answered quickly when I came across a thread about the TRX indicator at binaryoptionsedge.com. The same expiry and signal time was stated there as well, XX:50 and 40 minute expiry. Later in the comments I did also find out that you should, you guessed it, avoid trends and only take the signals that occur in ranging market conditions! Some of the traders there had also come to the conclusion that the indicator works best along with Price Action and preferably some other indicator, Stochastic Oscillator for example. Are you starting to come to the same conclusion as I’ve? That something is fishy here, right? Not sure yet? Okay, take a look at the picture below and keep reading. Comparing the information on the thread at Binaryoptionsedge.com with the information on binarybrainwave.com. The rest of the details can be found among the comments in the same thread.

Still not sure what I’m getting at? Then allow me to spell it out for you; Binary Brain Wave is way too similar to the good old TRX indicator. Binary Brain Wave seems to be a redressed and repackaged version, given a fancy name and a nice looking website. The only difference I can find is that one costs almost 100$ but the other is free. 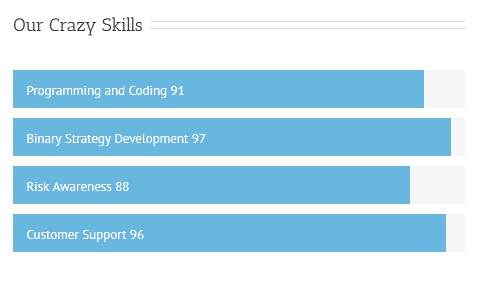 Honestly, I was expecting to see results of at least 50 previous trades or a video demonstration of trades being taken. However, all my attempts of finding any proof of their win rates on their website were in vain. I thought, since they’ve been using this system from 2011 up until present time, they should have at least a couple of hundred results to show off with. They claim the accuracy is “proven” to be over 70% or 80% for the past two years and 82% for 2014 if you would to scroll further down the page. The system generates in average up to 12 signals per day but it seems we just have to take their words for it about the accuracy…

Is Binary Brain Wave a Scam?

Binary Brain Wave is most probably the same indicator as the Launcher Directional TRX but perhaps with a few modifications. For example, the part that filters out trends or more correctly put: they claim that it does filter them out. As I said before; I found no proof of any high win rates. Only thing that makes sense here is that the Binary Brain Wave and the TRX indicator seem to have a lot of details in common. I also did a quick calculation on how an account with a 10 000 dollar balance would grow with a consistent 70% win rate with 10 trades a day times 20 days each month and times 10 months each year and only 80% returns. By the third year, the traders who made Binary Brain Wave would’ve made over 7 million dollars.This means that if you just wait out the rest of 2014, their 7 million will, with the 82% accuracy that they claim to have this year, turn to Billions with a big B and they will for sure sell their system cheaper after being so filthy rich! Does this mean they are scammers though? Hmm… Claiming you have over 70% win rate to get people to buy your product, without showing any proof of any kind, it’s “scammy” enough to me!

Conclusion; Use Your Own Brain Waves

So… What do you vatos want to do ese? If you ask me, I would just stay away and learn to trade on my own. Why should I blindly trust someone with my money? There’s nothing there that proves the indicator actually works correctly and with such high win rates. It is tempting to have an 80% win rate but once you understand that it’s just exaggerated advertisement to take your money, it’s easier to ignore. So stay away from the brainless bot called Brain Waves. If you still like to try out a similar/same system, then it should be a no-brainer to choose the free Launcher Directional TRX instead!