Ever heard of arm wrestling? It’s that sport where two guys lock hands and each one tries to prove he is stronger by bringing down the other guy’s arm. The winner then continues to show he is Alpha-male material by flexing his muscles towards the public and sometimes growls in an attempt to get the chicks interested… who could resist that show of power… Ok, but that behavior is not limited to humans and sometimes (actually all the time), currencies behave the same way. Anyway, currencies don’t have muscles to flex and can’t growl, so we need another way of knowing which one is stronger… yep, there’s an indicator for that.

Why Currency Strength is Important for Binary Options 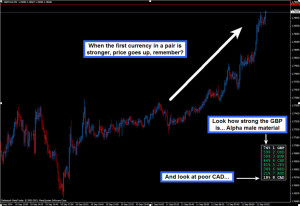 How to use MT4 Currency Power

The picture above shows the chart of GBP/CAD and I am sure you can notice the clear uptrend. In the right lower corner you can see the MT4 Currency Power indicator which shows us clearly that the Pound is much stronger than the Canadian Dollar. In fact they are so mismatched that I almost feel sorry for the CAD… it’s like I would try to arm wrestle with Rambo… not fair at all. But we don’t really care about fairness, do we? If I see something like that on my charts, I won’t stop to cry about how weak Canada’s Dollar is; I’ll just place a Call on that pair.

If you would look at a chart of two currencies with similar power, you would see that price is not moving very strong in either direction. Since the two currencies are equally matched, no substantial moves can be seen on the chart so the idea is to pick two currencies that are not in balance and instead are far apart on the indicator. In other words, trade a currency which is at the top against one which is at the bottom. You don’t have to trade only the 1st place against the last place, but it would be good to check and make sure that you pit a strong currency against a weak one. You need to know something else: what comes up must come down. If a currency has been at the top for a long time and its counterpart has been at the bottom, you must be aware of the fact that they will return into balance. The stronger currency will lose power eventually while the weaker currency will gain some strength. This is actually just common sense because you cannot expect a currency to remain at the top forever… even Michael Jordan had to give up the first place at a certain point. Ok we all know that was a bad joke… Michael Jordan is still Number 1 and will always be.

The information shown the indicator is not something to sell the farm for, because there’s nothing preventing the currency at the bottom to strengthen or the other one to weaken. The Currency Power indicator shows the current state of the market and has no predictive power. Five minutes from now, the market can change direction and the balance of power will change as well. But then again, this is the weak spot of all indicators: a Moving Average can go up and immediately change direction, a MACD can cross above zero and drop back below it in a few minutes… so there’s no substitute for a bit of experience.

Let’s assume your strategy gives you a signal at relatively the same time on two different pairs. Taking both trades would mean that you increase the amount at risk and you don’t want to do that so you need to choose only one pair to trade. Well, in that case the Currency Power comes in handy: go for the pair which has the most mismatched currencies but keep in mind that this last advice doesn’t fit all trading styles. Maybe you are a counter trend trader and you want to sell the strongest currency, anticipating it will weaken, or maybe you trade Boundary and you need a ranging pair (currencies close together on the indicator). The thing is that Currency Power can be used by any type of trader but it needs a different approach.

The Currency Power can help you see at a glance how the major currencies behave, but the final decision is yours and I wouldn’t advise you to trade based solely on the currency rankings shown by the indicator. Several other factors must be taken into consideration, because if trading would be as easy as trading the top currency against the bottom currency… probably the creator of this indicator wouldn’t have shared it. Holy Grail or not, thank you for sharing.