Candlesticks are a great way to view the market. If you have read any other articles by myself, Bogdan or anyone else on BOTS you will surely know that we love them. Personally, they make the market jump off the page when I am looking at my charts. The black and white candles, the long bars, the short bars, the doji’s and the patterns are much easier for me to see and interpret. Adding to that is the history of candlesticks and the sense of adventure I get when I think of the different patterns. The names are like moves a martial arts master uses in combat.  Rising Three Methods! Shooting Star! Spinning Tops! Long Black Candle and Harami Reversal for the kill!

What The Hell Is A Harami?

It sounds a little bit like a kind of sushi, but no, it is a well respected and widely used candlestick charting pattern. If you are not familiar with candlesticks and candlestick charting you should definitely start with Bogdan’s series on candlestick basics before going any further here. So, assuming you are at least (mentally) wearing your samurai suit we can move forward. A harami is one of several generic candlestick patterns that could occur at any time. The key is where a harami forms. Harami’s are great when used a confirmation signal following a trend or at support. This signal is formed when a long black candle is followed by a small white candle. The small white candle must be completely within the body of the long black candle, including its upper and lower wicks. Advanced traders may also sub-categorize harami’s by the size of the black candle and/or the size of the small white candle. 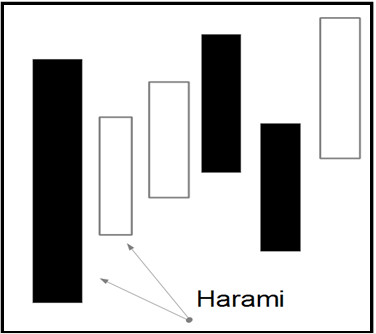 How To Use The Harami Reversal

As I said before harami reversals are best used when following a bull trend or when prices are bouncing from support. Harami’s can be used to confirm bottoms and major market reversals when used with other analysis. Basically, harami reversals are used to predict the reversal of short term market corrections. What this means is that when you are following a recognizable up trend and the market begins to pull back a harami may form. Look for the signal at the near term support, the trend line, the short term moving average or other trend following indicator such as Fibonacci retracement.  The key to using this signal is using a trend following strategy to start with and then adding the harami to it as a confirmation and entry signal. If prices are trading sideways, consolidating or retracing a rally harami’s can also be used to identify support. If the harami forms above a support line it will have bullish implications. If it forms below the support line watch out and use caution.

Why Harami Reversals Do Not Suck

This strategy does not suck because it uses candlestick analysis, is trend following and can be used as a confirmation of other analysis devices. Candlesticks don’t suck because they make reading charts easy, the harami doesn’t suck because is an easy candlestick pattern to recognize. I also think trend following strategies don’t suck. In fact, they are my favorite and most highly recommended form of trading strategy. Finally, confirming your analysis doesn’t suck. No strategy should rely on any one tool and this is great when used as a confirming indicator or in a basket of convergent signals.

This strategy might suck if you don’t have a good grasp on trend following techniques. Harami’s are a basic and generic candlestick signal that can appear at any time, in any trend and at any price level. A harami that forms in the middle of a trading range, far from support or resistance, is not as strong as a harami that forms at or near a strong support level.

My Last Thoughts On The Harami

I like the harami. It is a good confirming indicator but not one that I would ever use alone. I would at least need to add trend, support and resistance before making any decisions based on this pattern. I do not want you to think its not good, it just shouldn’t be use alone. The good news is that it works well with any form of trend following support indicator. Trend lines, support lines, Fibonacci retracement or fans, moving averages, envelopes and bands all provide valid areas where harami’s may form. The key is where it forms. Trend following harami’s are much stronger than contrarian ones. For me, a strong harami would be one that follows trend by breaking a support line with the long black candle and then confirming it with the white candle or doji.