The KDJ indicator is one that I stumbled upon when reviewing a strategy the other day. The strategy turned out to be prohibitively complicated for newbies but this indicator emerged as a potential diamond in the rough. It is no secret that I am a fan of the stochastic oscillator so you can imagine my interest when I learned that this one is based on the same. In a nutshell, stochastic is based on the Greek concept of stochos or randomness. This is the simple basis of modern mathematical concepts like Brownian Motion and Chaos Theory. Stochastic seeks to determine the underlying direction and strength of the market by analyzing the seemingly random shorter-term movement. Stochastic does a pretty good job and provides more kinds of signals than I can count with two hands. Will KDJ live up to the claims of improving on what I think is the perfect indicator?

What Is The KDJ Indicator

For those of you who don’t know, Stochastic is an oscillator. The formula compares the current close to the low, high and range of a set period and then creates two lines, %K and %D. %K is the faster line, %D is simply a moving average of %K and provides a signal line. The KDJ adds a third line, the %J, for a total of three; %K%D%J, KDJ. The %J line is nothing more than the difference between the other two lines, very similar to MACD. The big difference between %J and MACD is one, it isn’t presented as a histogram and two, the two figures are weighted giving more emphasis on the shorter term %K line. This creates a line that moves very slowly and has the ability to move outside the range of the typical Stochastic indicator. Stochastic ranges between 0 and 100, KDJ can move outside this range and that movement is one of the signals it can give. 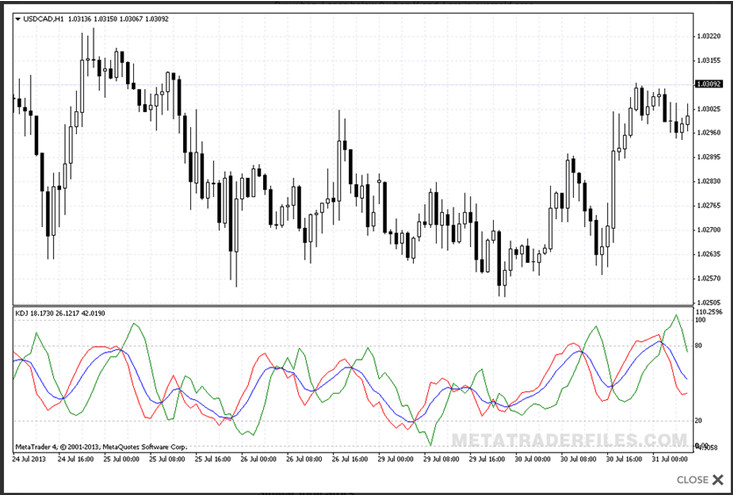 It works a lot like regular stochastic but because it is so slow, it is a bit of a lagging indicator. The most common signals it gives is based on where %J is in the range. If it is between 20 and 80 the market is neutral, if it is above 80 it is bullish/overbought and if it is below 20 it is bearish/oversold. If it is below 0 or above 100 it is very bearish or very bullish, but also very-oversold and very-overbought, so you have to be careful. These lines are used for crossovers in either direction but best used in line with the trend. More advanced signals include divergence and convergence with trend that can foreshadow underlying strength or weakness. These are perhaps the best the signals given the lagging nature of the indicator. Don’t forget about the original %K and %D because they help to weed out a lot of the false signals. When they confirm %J the trade has a much better chance of moving into profit.

Basically, the KDJ is used the same for all types of trading (FX, CFD, Crypto, etc.) but you have to take into consideration the particularities of each asset you are trading. For example, if you see a strong uptrend but the KDJ is above 80 or even above 100, don’t just sell that asset simply because the indicator says it’s overbought. In an uptrend, oscillators can show overbought several times before price actually reverses, so you might get a lot of bad signals, which will either take out your Stop Loss (in case of FX, CFD, etc.) or expire out-of-the-money (in case of binary options trading). The same principle applies to the downtrend, of course.

So, no matter what type of trading you are doing, the signals are given by the KDJ Stochastic remain the same and can be used the same, with the obvious difference that for FX, CFD and Crypto you will use Buy and Sell and for Binary Options you will use Call and Put. I don’t think it was even necessary to mention that, but there you go.

Keep in mind this is not a complete strategy and the KDJ is simply an indicator that should be used in conjunction with other indicators or tools to help you trade successfully.

At first, I wasn’t too sure about but I think in the end this indicator could be OK. It provides another layer to the stochastic indicator by helping to illustrate longer-term conditions in the market. I don’t know if I would want to use the %J by itself but the combination of three lines of stochastic can only make it better. You may have to wait a little longer for all three to line up but rest assured that when they do the market will move.

This indicator might suck because it is a lagging indicator, really lagging. It will take some time for %J to reverse but when it does it will be something to take note of. Why it really sucks is because it might confuse other analyses and/or keep you out of trades you otherwise would have won. Waiting for all three lines to move in tandem could take a long time. In some regards, the %J is like a training wheel attached to stochastic. It helps you by showing the long term trend but may keep you from faster-paced trades.

I like KDJ, it is a good tool. The third line is a perfect addition for newbie traders and can help them get the hang of using stochastic. First, it can help by setting a trend. When it is moving up, you trade up, when it is moving down, you trade down. The thing is, it is no good by itself and only marginally useful alongside the underlying stochastic. It could be a good tool for newbies but I don’t think I will be using it in the future.