Candlesticks, support/resistance and chart patterns. These are key elements of trading and mastering them should be one of your primary goals. I am not just saying that because it’s cool, I’m saying it because it will help you become a better trader. All these patterns predict the future direction of an asset and needless to say, if you know the direction, you can make money. But sometimes it can be hard to identify them on a chart, either because you are not familiar with all of them or because you just weren’t paying enough attention. To help with that, I’ve prepared a small “collection” of recognition tools for patterns, candlesticks and support/resistance.

Double tops, Double bottoms, Head & Shoulders, Inverted Head & Shoulders, triangles, wedges, flags, pennants, these are all chart patterns but the list doesn’t stop here and there’s a huge number of patterns. For a newbie it’s hard to learn all of them and to be honest, you don’t need to for two reasons: firstly, not all of them are important and secondly, you can use software to help you recognize them. The most well known chart recognition software is AutoChartist, which is a tool offered for free by some Forex brokers and lately by Binary Options brokers as well. For an in depth review of this tool, please read our article Autochartist Tool – Making Life Easier for Traders. Once a pattern is identified, the trader can decide to trade the following possibilities:

1)      One Touch in the direction of the price movement defined by the chart pattern.

2)      No Touch in the direction away from the price movement defined by the pattern.

3)      Out boundary trade in which the asset price will touch either one of the price limits. 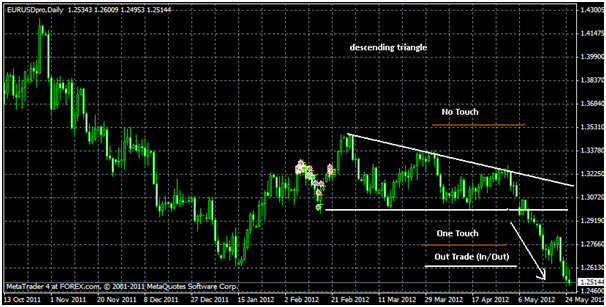 On the pictured chart you can see a clear descending triangle, which provides three trading opportunities as described above. Without any news release to promote Euro bullishness, the trade possibilities will hold and will all score profits if appropriate expiry dates are used.

Candlestick reading can be a very powerful tool and I strongly recommend you learn to master it. To get you started, we’ve prepared two articles: Japanese Candlesticks for Binary Options Trading – Trading Naked and Japanese Candles – The Sequel, but just in case you don’t feel like learning, you can use software to alert you when a certain type of candlestick appears. We’ve already reviewed the Pinbar Detector but similar software can be found for other types of candlesticks. Usually these programs will also print an arrow pointing in the predicted direction so it shouldn’t be too hard to use them but you must always remember that a candlestick or a formation of candlesticks should be used in conjunction with other factors. In other words: you need more than one indication that price will go in a direction, not only candlestick recognition.

They say there’s an app for everything. Guess what: there’s also an indicator for everything, so there must be one that automatically identifies Support and Resistance. Yup, there is and you will find it if you follow this link (you’ll also find a video by Okane so make sure you check it out as well). However, indicators don’t show support and resistance as well as a human can so I recommend you learn to do it yourself. If you are in the mood for learning, here’s Michael’s article on Support and Resistance for Binary Options.

Price Action recognition software may be cool, but it has some major drawbacks. One is that it does not predict how long the future pattern will last. So while the trader may have an idea on the future price direction of the asset, it leaves him no clue as to what expiry time he should set. Another reason why the chart pattern recognition tool sucks is that it will not work when a major news release has impacted the price of the asset.

The multitude of chart patterns, candlestick formations and support/resistance levels can be overwhelming for a newbie and this is where software comes into play. It will help you identify these technical elements, acting like training wheels when you are not sure about a certain pattern or S/R level. Say you look at a pattern and believe it’s an ascending triangle but you are not 100% sure. Well, if the software says the same thing, chances are it’s a true ascending triangle. Same with support and resistance, same with candlesticks.

Remember that throughout this article I used the word “predict” when referring to chart patterns, candles and S/R. That inherently means it’s not 100% sure, so don’t go selling the farm just because a double top is formed or a pinbar appeared. The perfect chart pattern can fail and the strongest support or resistance level can be broken so always use multiple confirmations before trading.