Full Review of  the Stupid Guy Strategy for Binary Options

Here at BOTS.com we’re always searching for new and useful strategies for binary trading.  When I was first told about the system I was very excited.  The system is based on MACDand MACD crossovers, one of the pillars of my own trading strategies.  MACD is a great indicator for Forex, equity and binary trading.  The MACD is a useful tool for trend determination, support/resistance and reversals. With that in mind it’s should be easy to see why I was eager to learn more of this technique. However, after reading the system and the comments left by new users, it was easy to see why it’s called the Stupid Guy system (http://forex-strategies-revealed.com/basic/stupid-guy-system).  Any stupid guy can use it and you’d have to be one to want to.

The Stupid Guy System is based solely on MACD crossovers.  MACD, moving average convergence divergence, is a technical indicator that utilizes two moving averages.  One average is longer and sets the trend, one average is shorter and delivers the signals.  The way it works is when the two moving averages move closer and farther apart, converging and diverging. In an uptrend when the signal line crosses over the trend line you get a buy signal for binary calls.  In a downtrend when the signal line crosses under the trend line you get a signal for binary puts.  MACD can be displayed on your charts in two ways. The first looks similar to stochastic and other oscillators.  The two moving averages move over and under zero and can reach overbought and oversold conditions. The second is called the MACD Histogram which is a histogram representation of the amount of convergence/divergence in the two moving averages.  The Stupid Guy System focus on crossovers and only uses the histogram as a secondary indicator.

Traditionally MACD is calculated using the parameters 12,26,9.  This is what I use and what works for me.  The first warning sign I found when reviewing this strategy was Wolf’s (that’s the author’s name) decision to modify MACD to 35,45,30.  I’m not saying that it’s wrong but I need more proof than his word that it works.  After that his description of the strategy was fairly short, only a few sentences. He uses the indicator with charts of 15 minute bars, I like to use 30 minutes as my short time frame.  Wolf’s strategy is very simple, wait for a crossover and then trade according to the signal.  Pretty simple.

This strategy doesn’t suck because it uses MACD, one of my preferred technical indicators.  MACD is great for determining trend, reversals and entry points.  MACD helps me determine potential support and resistance lines and can even telegraph impending market reversals.  I use MACD every day and will continue to do so.

Why The Stupid Guy System Sucks

This system sucks for a number of reasons that boil down to one thing.  It doesn’t work.  First, I find his choice of MACD parameters to be arbitrary. Why? What is the reasoning for adapting a tool that is widely recognized useful-as-is? Second, I think that Wolf himself proves my first point by changing his parameters not once, but at least 3 times later on in the comments section.  He changes it to 30,50,20 and then 35,50,25 and then once again to 12,21,20.  Each time looking for a faster signal. In the comments section he continues to experiment and expand on his theory by adding stochastic, changing his time frame and other modifications.

Also, comments from other users of the system are not encouraging. There are two main themes among them: how do you make it work and why do I keep having losses? Wolf’s responses to these are to send people to his Facebook page which makes it sound a little scammy to me.  It’s possible the strategy is meant to be flawed so that Wolf can drive traffic to his other sites. 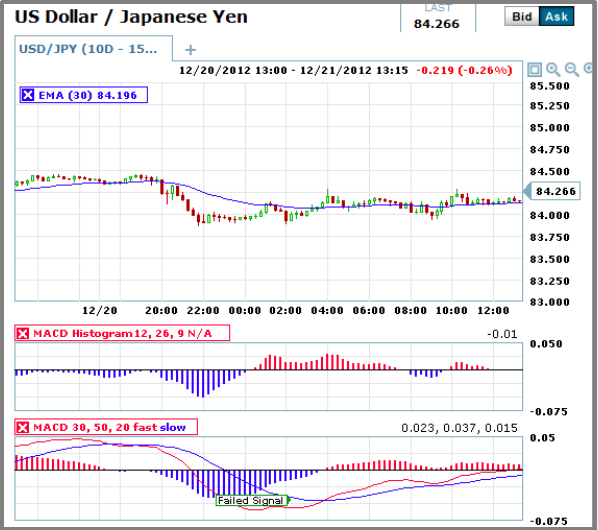 MACD good.  Trend determining good.  Support/Resistance determining good.  Market reversals good.  The Stupid Guy System not good. Don’t waste your time.  This is nothing more than a novice trader and financial writer testing the waters and experimenting with a good indicator.  With the knowledge that this strategy was first written more than two years ago I will look for more of Wolf’s writings to see what strategies he is using now.

Don’t have the same opinion on the Stupid Guy System? Ask Michael and our experts on the Forum!

posted in Strategies Suck And Dont Suck • 1 Comment
One Response to “The Stupid Guy System – Who’s Stupid Here?”
Sort By:
Click here to cancel reply.
Thanks for Submitting!