In a previous article, 7 Bullish Continuation Patterns,  the patterns were to be expected and traded in an uptrend only. This time, the patterns are to be found in a downtrend and precede a shift in direction, to the upside. I recommend that you have an understanding of trend lines and chart patterns and basic candlestick knowledge beforehand. If you are not familiar with Japanese Candlestick check out our article, Japanese Candlesticks- Trading Naked. 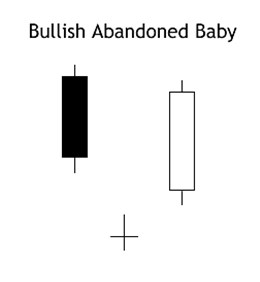 The “baby” is the Doji which is abandoned by the two longer candlesticks. 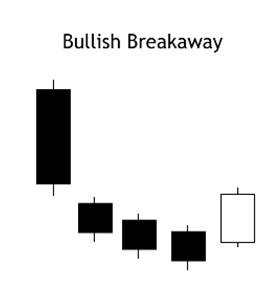 Price is slowing down, the bearish candlesticks have lower volumes and the bulls enter the market on the fifth candlestick, closing above the three bears. 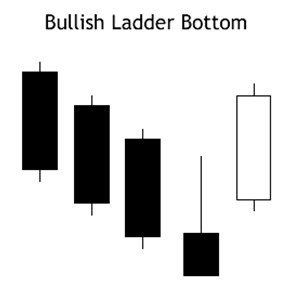 A bearish candlestick is nearing a support, the next bear candlestick reaches the support but is then pushed up to become a bearish hanging man/hammer candle. This is due to bulls pushing the price up from support, hence showing that bulls are ready to enter market and challenging the strength of the bears. The third candlestick opens near the beginning of the bear candles shadow, near support. It closes bullishly but under the body of the hanging man candlestick. After this the bulls should be in charge, and will likely lift the price into a new up trend. 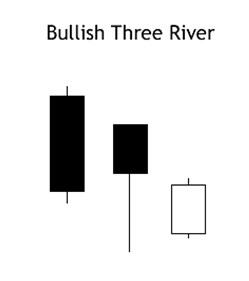 Support seems strong, proven by the long candlewick attached to the hanging man. The next candle is bullish – this is where the bulls have entered the market.

This pattern consists of two candlesticks only. When approaching support, a bearish candlestick is followed by a bearish Gravestone candle. The bears fought the bulls with their last breath, pushing the candle down and hence, created that long wick. This pattern is also very good at identifying possible support levels. Obviously, it is wise to further wait for a third and bullish candlestick to confirm support! 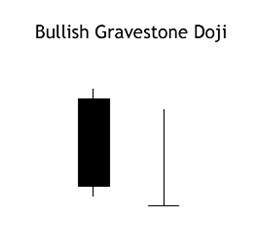 Wait for a confirming bullish candle after the gravestone.

This one is a classic. You will hear people talking about it and see it quite often on the charts.
Engulfing means: ‘to surround or to cover something completely’. In this case, it’s the white and bullish candlestick that engulfs the previous bear candlestick. This is because we are talking about a bullish engulfing pattern. This occurs after a down trend when a bearish candlestick closes near or at a support level and followed by a big bull candlestick bigger than the entire body of the bear candle. We call that a bullish engulfing pattern and it means the bulls are back in charge! 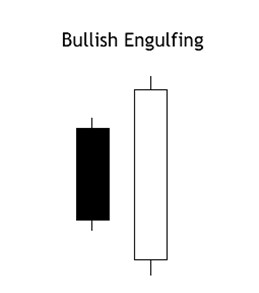 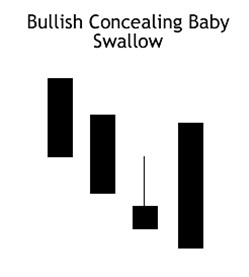 Notice how the bearish inverted hammer, third candlestick, is engulfed by the last Marubozu.

Bullish Reversals – Confirm them with Support!

These seven different bullish reversal candlestick formations should only be considered valid in downtrends. Further confirmation is absolutely required prior to considering any of the above formations a true signal such as occurring near a support level. You will notice that some of them rarely turn up on your charts so waiting for one to show can be tedious, this is why you need to know them all so when they appear you will be able to trade on them. Others, like the engulfing pattern, could show up repeatedly and on different time frames during the day. Take your time, carefully look through your charts as an exercise to see if you can notice any of the patterns you have learned in this article.  Just remember, the textbook formations and real market conditions can be different which is why we call it analysis, you have to analyze support levels and trends, then look for reversals.