I tried translating the word “Doji” in English but all I got was “clunker”, “blunder” or “clumsiness”. Not too helpful, eh? So, that’s that and it’s gonna remain in the wind, but what’s not gonna be left that way is the explanation of what a Doji is and how to use it for binary options trading. After all, we are not here to learn Japanese, but we are here to learn how to trade with Japanese candlesticks.

The Japanese love naming their candlesticks so you will see stuff like Morning Star, Hanging Man, Hammer, Marubozu and of course, today’s main attraction, the Doji. The first thing you have to know about this type of candlestick is that it’s pretty common and it is characterized by the fact that the opening and closing prices are almost identical. The Doji’s main “job” is to show market indecision and it is more important if it appears after a period when price trended strongly. Slow, ranging markets are indicative of indecision by themselves and often you will see lots of Dojis in these periods – don’t pay much attention to them, unless you have other indications that price is headed one way or the other.

Ok, so what we know so far is that a Doji is a sign of indecision and is more reliable if it appears after a strong trend; that being said, it’s time to see what it looks like and what are its variations:

This is the “vanilla” Doji, where the opening price is almost the same as the closing price. Keep in mind that this is a textbook picture and often times you won’t see the exact same open and close price. If the body is very small and the wicks are long, it still qualifies as a Doji in my book. 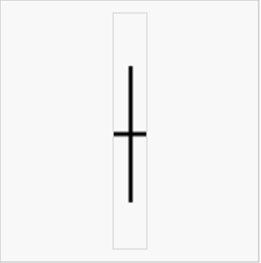 The story inside the candlestick: at opening, one side (buyers or sellers) took control, driving price their way but soon after, the other side stepped in and managed to push price the other way. By the end of the period, both sides were too weak, losing conviction and the candle ended almost where it started.

This is a variation of the vanilla Doji but its legs (wicks) are longer and usually this type of candle shows a greater amount of indecision.

The story inside the candlestick: one side showed clear strength, taking price decisively their way but soon after, lost interest or ran out of steam, allowing the other side to win the battle. By the end of the period, indecision settles in and both sides lose interest even if in the beginning they were both very adamant about their position.

This one usually appears at the end of an uptrend and is a common reversal pattern. It can appear at the end of a downtrend but this is a rare occurrence. Its main characteristic is that the open and close prices are nearly identical and occur at the low of the period (daily, four hour, hourly candle, etc.). This is also known as a shooting star, Pinochio or pin-bar doji.

The Doji Verdict: Does it Suck or Not?

This is not so much a case of Suck or Doesn’t Suck, because Dojis, like most other types of candlestick patterns, must be interpreted in relationship with the rest of the market conditions. If price rallies strongly, but a Gravestone Doji appears, it’s clear that the sellers are starting to build pressure, attempting to make a comeback. But sometimes the buyers are not ready to give up control just yet and after that Doji, price continues higher. Does that mean that Dojis suck? Not really, because the market is driven by people and people can change their minds: today they want to buy, tomorrow they don’t want anymore and the day after, they feel like buying again. That’s why there is not a clear formula for trading success, that’s why when you trade you cannot make your decisions based on only one factor. In other words, a Doji is not a clear signal to buy or sell, because, as I said, it is a sign of indecision and indecision can lead to a reversal or a continuation of the current trend. Combine Dojis with other stuff and never stop learning. Speaking of learning, I am sure you will find these articles helpful – keeping it Asian of course: Japanese Candlesticks, Japanese Candlesticks – The Sequel and Heikin Ashi – The Underrated Secret From Japan.