The other day while browsing through the vast archive of trading information that we call ThatSucks.com I was surprised, no shocked, to discover that we had no article on trend lines, what they are and how to use them as a tool. We do have a few strategies that rely heavily on them, most strategies use them in one form or another, and those links are included at the bottom. Before we move on let’s start with the basic definition of a trend line. A trend is defined as the general direction in which something develops be that a direction in physical prices or the movement of a herd or a more abstract direction like fashion or political thought. A line is a mark that connects two or more points together such as coordinates on a map or a series of prices.

When it comes to the market a trend line measures/delineates a developing trend in price action. In terms of an uptrend, it may mean a series of higher lows as the market ratchets its way up to new highs. In the case of a downtrend, it may mean a series of lower highs as the market winds its way lower. In either case, the lines are drawn through a set of significant points that mark where price action has been stopped and/or reversed. Think about it like this; as a market heats up and the value of stocks rise there will be a rally, the rally will reach a peak and then fall back to support. If the trend is truly up to each consecutive peak and support level will be higher than the last until buyers begin to dwindle and sellers begin to overpower the market. In this case, prices are “trending” higher, that is, the general direction is up.

A trend line connecting two of these points can be extended into the future and used as a target for entry signals because it becomes a line of rising support or resistance, depending on the direction of the market. In the case of an uptrend any time that prices retreat to the trend line are likely entry points, the next bullish candle signal you see the best likely entry just as it would be with a horizontal support or resistance line. In sense these lines can be said to be sideways trend lines or range bound trend lines since the market is trending sideways. The good news is that trend lines trade like support/resistance in many other ways as well.

Tip for trading trend lines – The old saying, the Trend is your friend trade with your friend, is a good one. It means that you should only make trades in line with the trend. If the trend is up, only take bullish signals. If it is down, only take bearish ones.

The converse theory of support and resistance, not an official term it’s one I made up and use, the converse theory states that support/resistance when broken, will become the opposite of what it was and with similar strength. What this means is that if a support or resistance line, in this case, a trend line, if broken will now act as resistance or support. In the case of an uptrend, if prices move down to a trend line and break through that trend line may become resistance. In this case, it is wise to wait for the confirmation before trading because trendline support/resistance is often tested with whipsaw like break-throughs.

This is a multifaceted question that can be answered in so many ways. I will stick to the application of trend lines to your charts and leave the mechanics of actually putting a trend line on your chart to the forum. The first thing I have to say is that trend lines can be subjective, it just depends on which peaks or troughs you use, which time frames you use, and where you anchor your lines. The next thing I will say is that ALL trend lines have significance, some more than others, but all are important and will affect price action to some extent. An array of trend lines that intersect closely with price action can be traded in exactly the same way as Fibonacci Fans and Fibonacci technique in general, but I get ahead of myself.

The basic concept is to draw lines from peak to peak or trough to trough, or both. If you do both you end up with a trend line channel that can be traded just like another kind of technical analysis channels, linear regression, Keltner Channels, Bollinger Bands, the works. The best way is to draw them between two well-established points but sometimes you have to work with what may become an established point, like when the price is reversing and is making the first higher high or lower lower low.

Once a point has been chosen as an anchor for a trend line the next question becomes, do you anchor to the close, the high, the low or what? In the case of a downtrend, I would anchor a line to both the high of the day (the tip of the upper shadow) and either the open/close of the day of the candle in question, whichever is higher. For an uptrend anchor the line to the lowest point of either the open or close, and the low of the day (the tip of the lower shadow). Each line should then be anchored to the respective point on the next peak or trough in question, you will most likely end up with two lines that look like this. 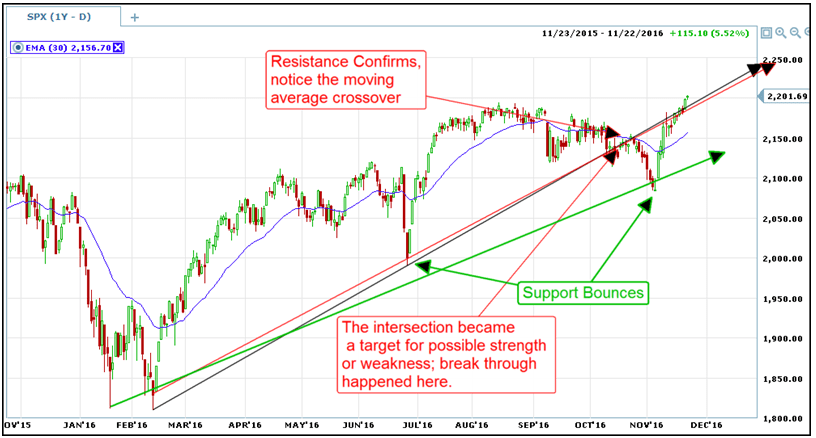 Trend lines can be used in any time frame. Like other forms of analysis, the lines drawn on the longer time frames will be stronger than the near-term time frames. The best approach is to establish a long-term trend line and move down to a shorter term time frame and look for trends there, using the long-term line as a target for support/resistance etc. In the picture below you can see the long-term bounce as shown in the example above, but on an H2 chart instead of D1. There is a bounce, followed by a gap up and a trend that lasts for several days until broken. Regardless, any bullish signal on this chart would be considered an entry until a bearish reversal is confirmed on the D1. 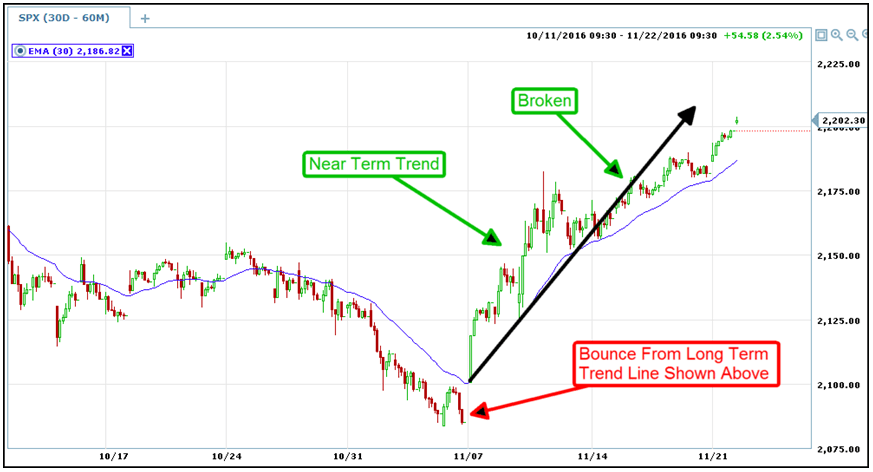 The bottom line, no pun intended, is that trend lines are useful tools and can be used in many ways. Even if you choose not to draw them on your charts having a healthy understanding of them and how they work will help you with your trading. All it takes is a few practice charts and those trends start jumping right off the charts, let me tell you. The best use, like with all tools, is to use trend lines with other tools like moving averages, stochastic or RSI. These tools can confirm your trend line signals and generate additional signals while the market is making its bounce.